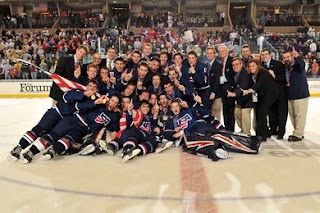 The World U18 Hockey Championship has ended with the hosts capturing the gold medal after downing Russia by a convincing 5-0 score. It's the second year in a row that the Russians have been shutout in the final game with Canada hammering them 8-0 12 months ago in Moscow.

It was the third title in the last five years for the Americans who have become a true power at this age level. It's odd that the country struggles so greatly at the u20 World Junior Championship each year unless those who suggest a late and light college schedule really does hamper the American team. The fact that this U18 winning team plays a much more CHL-like game schedule would lend credibility to that theory.

This game wasn't even close as the Americans pounded the Russians with 43 shots while their guests only mustered 17 of their own.

Earlier in the day Finland pulled off the upset by beating Canada for the bronze medal with a 5-4 shootout victory. Toni Rajala, whom TPS singled out as a player to watch, scored three times for the Finns including the shootout winner. Rajala ended the tournament on top of the scoring race with an impressive 19 points in 6 games. If you didn't believe us a week ago, believe us now: Rajala will go in the 1st round this June.

The official IIHF home site has this complete write up of both of today's games. 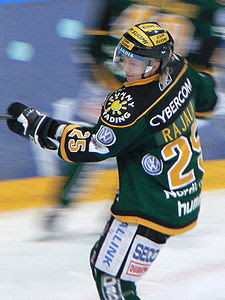 Not surprisingly, the Top Forward was given to Rajala who lead the tournament in scoring with 19 points, four more than runner up Vladamir Tarasenko (RUS) and six greater than teammate Teemu Pulkkinen.

Somehow Russian Igor Bobkov was chosen as the top netminder of the tournament. His 92.70 save percentage ranked 3rd best behind Jack Campbell (USA) and Michael Zador (Canada), and his 3.33 GAA ranked 6th.

Cam Fowler of the USA claimed the Top Defenceman award which is impressive considering he is not eligible for the NHL Draft until 2010. Fowler's 8 points were second in the tournament but his +8 rating was second amongst defencemen trailing behind teammate Phillip Samuelsson's +9.

The Media All-Star selections made more sense with Campbell winning in net, Fowler and Tim Erixon (SWE) on defence and Rajala, Tarasenko and Jerry D'Amigo (USA) the top 3 forwards.