Swinging For the Fence 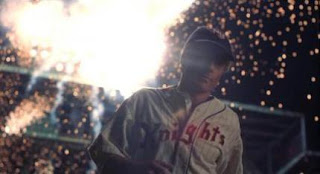 I get the sense that many Oiler fans want to see their team go hard after a big name or two this off season whether it's via trade or free agency. Owner Darryl Katz has the cash, so why not - right?

Last summer Marian Hossa was a big name target who turned down ridiculous money for a 1-year deal with Detroit, a team he correctly assumed would be a Stanley Cup contender. Unless the Red Wings find a way to keep him in the fold he'll be a UFA again this summer and one has to wonder if the Oilers will be in hot pursuit again.

Georges Laraque was targetted by Darryl Katz, you'll have a hard time making me believe that it was a Lowe/MacTavish idea, and it sounds like he could easily be had from Montreal. He might not be considered "big money" but he's a big name in these parts.

Vincent Lecavalier... well, who wouldn't want him on their team? I personally don't think it would be a good fit though. I find it hard to believe a guy can spend his entire career in South Florida and then be content playing in the NHL's northern most franchise. That could have Pronger-gate written all over it.

There was a time when I was an Oiler fan. However, since working my way into the 'media' side of things, the fan part of me is far less team specific and so now I find myself cheering more for players, coaches or organizations that I've come to like via my dealings with them for the show or for whatever writing projects I've done.

That said, I live in the Edmonton area and would like to see the local team prosper. It's the NHL team that I deal with the most so naturally there are people in the organization that I would like to see have success and eventually win the Stanley Cup.

But in regards to making a splash this summer, I think they can do so without backing up the truck. I would like to see the Oilers be aggressive in their pursuit of free agent goalie Jonas Gustavsson and win out as the team that is eventually able to sign him. 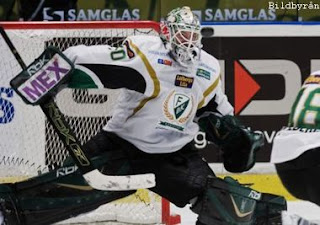 If you want to show the rest of the league and the players that you are ready, willing and able to win free agents, here's a great place to start. It's been reported that in the neighborhood of ten teams are vying for Gustavsson's signature and that the deal should close after the World Championships.

Here's an impressive story on Gustavsson via The Hockey News from late last month.

Do the Oilers have a need for a goalie? I outlined to Millard a few weeks ago that I would understand if 40-year-old Dwayne Roloson took a page from Hossa's book and signed on with a true Cup contender like Detroit or Philly. Dean wrote a piece mentioning Gustavsson last week as well.

Since then TPS has been told that while the Oilers would like to sign Roloson to a 1-year deal the veteran goalie is likely looking for 2-years at significantly more dollars than Edmonton would be willing to pay out this time around. Jason Gregor is forewarning Oiler fans of the same thing.

So yes... the Oilers are in the market for a goalie (or will be once the Roloson-era officially ends). 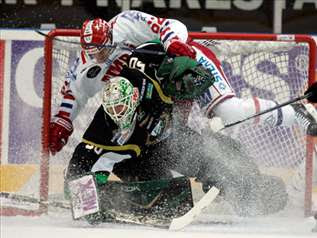 Can Gustavsson be a starter in the NHL? No one can guarantee that either way - he might be an instant star or he could totally tank it, but he has been successful in the Swedish Elite League and those I've talked to suggest the hype is for real. The Oilers have back up in Jeff Deslauriers and Kevin Prendergast recently told everyone he feels JDD is ready to take on a bigger role in the organization.

Would a tandem of 25-year-olds in Deslauriers (May 15th) and Gustavsson (Oct 24th), with little and zero NHL experience, be a smart move? It certainly wouldn't be without risk but I don't consider the Oilers to be contenders next year any way, not even close, so it would be a terrific opportunity to help hone both prospects for the time when the team is in fact a force.

It would also be cheap.

According to NHLPA.com Deslauriers made $550K last year although I believe the cap hit was $625K and will be the same next year. (If someone knows differently, please leave it in the comments section). How much could Gustavsson reasonably expect? Taking into consideration that he's an unrestricted free agent that's in demand, would $1.5-$2 Million be more than reasonable? (I'm usually horrible with predicting signings so I could be completely out to lunch, again, YOU tell me.)

The point is, it'll be a cheaper duo than the Oilers have recently had while being potentially very productive which makes the risk much easier to digest.

I also like the fact that Bryan Burke and the Leafs have publicly declared their intentions to sign Gustavsson, somehow draft John Tavares, sign Matt Gilroy (oops!) and grow a clone of Darryl Sittler.

Knowing full well that the Leafs (and others) are going all out to get Gustavsson, what would it say if the Oilers were somehow able to come away with the prize instead? 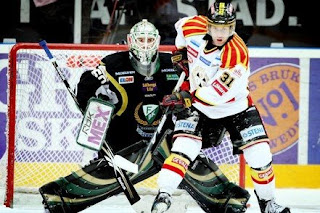 Personally I think Edmonton is a much better fit for Gustavsson than a lot of places anyway, especially if he wants to play. In Toronto he'd be behind Vesa Toskala, in Dallas they still have Marty Turco.

The organizations that I see where Gustavsson could potentially step right in and play are fairly limited; Colorado (Raycroft is UFA and Budaj is... average), maybe the Islanders who have DiPietro until 2016 or so but two UFAs behind him and Philadeplphia with no sure-thing in the system to replace Biron and Niittymaki (although I still think they go for a vet like Roloson).

To me Edmonton is a perfect fit for him.

It might not be the big free agent battle some are envisioning but winning the fight for Gustavsson could pay off just as well as rolling the dice on an A-list UFA and would cost the Oilers less if it turned out poorly.

Swing for the right fence... there might be a home run waiting.
Posted by Guy Flaming @ 11:59 AM

The Oilers are getting trashed in the Swedish media right now for their handling of the Omark situation.

You think that might affect Gustavsson's mindset when it comes to choosing between teams like New York, Detroit and Edmonton a tad?

I obviously can't say for sure what he'd sign for but, if my memory serves, I remember Jonas Hiller had a cap hit over $3M when he first signed with the Ducks. I wouldn't expect Gustavsson to get that high a figure and I would assume it'd be less than the large majority of starting goaltenders, but I wouldn't count on him having too cheap of a cap hit.

M.R.: That's a great point and the fact that Burke has been talking with the agent... you know he's not saying anything good about Edmonton either.

The Hiller contract was also 70% bonus money, as an overage Euro still has to spend a year on an entry-level deal. So under a million real salary.

You can exceed the cap next year if it's because of bonus money (with the consequence that if you actually pay it, it's added to the cap hit the year afterwards)

My understanding is that next year works the same as this year in that you're not allowed any overage. If you are, then you're right, it won't really be a problem.