Each week, International Scouting Services (ISS), Sports Management Worldwide (SMWW), Hockey Now, and The Pipeline Show recognize the Top Draft Eligible player from each of the WHL, OHL, QMJHL, & USHL leagues for the upcoming 2009 NHL Entry Draft based on their play over the course of the week. Players are nominated and the selected by graduates of the SMWW Hockey GM & Scouting program and some appear each week on TPS. 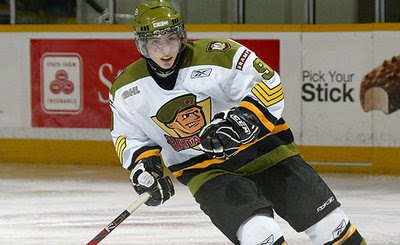 Matt Duchene is this week’s OHL recipient after scoring twice and adding 3 assists in 3 games this week for Brampton who won their second round series vs. Mississauga in six games and will face Belleville in the OHL Eastern Conference final. Duchene is a gifted offensive player and sure fire first round pick in the June draft. 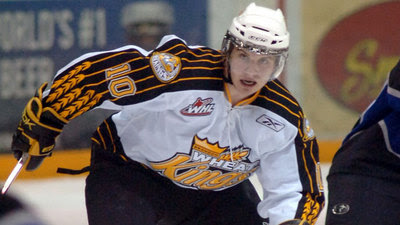 Brayden Schenn takes the WHL award after scoring 2 goals and adding 4 assists in 3 games for the Wheat Kings. Schenn is amongst the top WHL playoff scorers with 6 goals and 9 assists despite playing only the minimum 8 games thus far in Brandon’s two series wins over Kootenay and Medicine Hat. Schenn is a game breaking player with offensive talent and a physical edge.

Jordan Caron gets the QMJHL nomination after scoring 2 goals and adding 2 assists in 3 games this week versus Moncton. Caron has 3 goals and 4 assists in 9 games in this year’s postseason. The Sayabec, PQ native is a reliable player who is effective at both ends of the ice.

Mike Lee is the USHL’s award winner after defeating Omaha in 3 straight games this past week and helping the Force move on to the second round of the playoffs. Lee is a multiple nominee as draft performer of the week this season and it is his athleticism and ability to make big saves that gives him the edge over his opposition.

I remember the first time that I saw this kid when he played for Bloomiongton-Jefferson (MN) HS. It's rare that I get really excited about current Minnesota HS goalies because very few have such enormous pro potential at such a young age, especially the non-seniors. But when I saw Mike in his junior year at Bloomington, I was absolutely floored by how good he was! It's nice to see that he's been able to build on that in the USHL and continue to get strong draft interest.

IMO, I expect him to be a relatively high pick in the draft where goalies are concerned. This is definitely a must-see kid.