One on One: Brandon Kozun 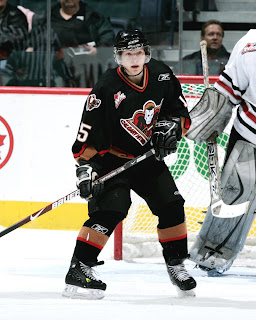 Round 2 of the WHL playoffs kicks off tonight and one of the most anticipated series is going to be the one between the Calgary Hitmen and the Lethbridge Hurricanes. Calgary steamrolled over the Edmonton Oil Kings while the 'Canes went the 7-game distance before eliminating the Saskatoon Blades.

Calgary's lineup consists of an almost endless supply of offensive weapons. Joel Broda was the league's only 50-goal scorer this season, Brett Sonne cracked the 100-point plateau, Paul Postma had 84 points from the blueline and the team had six 20-goal scorers.

Leading the statistical charge though is an undrafted 19-year-old named Brandon Kozun who ended the year with an impressive 40 goals and 108 points. The Calgary native added 5 more points during the opening round sweep of Edmonton and was a plus-6 while doing it.

I had a chance to talk with Kozun after Game 4 in Edmonton and we discussed that series win, the seemingly flawless Hitmen lineup and also got his own explanation of why he thinks he went undrafted last year and how that fueled his fire for this season.

I've asked a number of scouts this year why Kozun was passed over and as you can probably guess by looking at the picture above, it all comes down to size (5'8, 150 lbs). But in a world where 5'9 160 lbs Patrick Kane is a Calder Trophy winner and 5'9 165 lbs Tyler Ennis is a first round pick you know that century point scorer Kozun is not going to slip through the cracks again this June.

You can hear the TPS exclusive interview HERE.
Posted by Guy Flaming @ 6:00 PM