~
The Kelowna Rockets have defeated the Vancouver Giants in 6 games and will now face the Calgary Hitmen for the WHL Championship and the right to represent the league at the 2009 Memorial Cup. 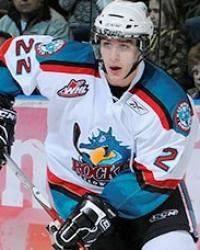 It was a dramatic and controversial game 6 in Kelowna as the final goal came at the 4:00 mark of overtime. Mikael Backlund's (CGY) third goal of the night was reviewed as a possible high stick but it was eventually declared legal thus the Rockets advance to the league final.

The Giants held a commanding 4-2 lead with less than five minutes to go in the third period after scoring on a Tyler Myers (BUF) 5-minute major. However, Jamie Benn (DAL) and Cody Almond (MIN) scored 33 seconds apart to close the gap and force the extra time.

Myers was ejected from the game for a serious hit from behind that he laid on Giants defender Craig Schira (OTT) who was badly cut on the play. The hit will be reviewed by the league and could lead to a suspension for Myers.

Vancouver netminder Tyson Sexsmith (SJ) arrived after his teammates as he fought the flu. There was some question whether he would play tonight as he did not travel with the team but joined them as late as possible in order to rest.

2009 top prospect Evander Kane had a pair of goals for Vancouver in the losing cause while Backlund led Kelowna in the game with the hat trick. Ian Duval (UFA) and Tyson Barrie ('09) both had a pair of assists while Almond had a goal and a helper. 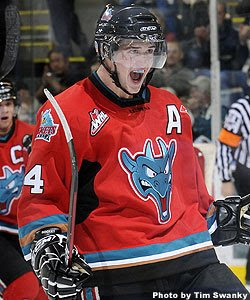 The WHL final will begin on Friday in Calgary as the undefeated Hitmen will have home ice advantage. The Hitmen have been unbelievable at home this year losing 3 times in regulation at the Saddledome all year long... the last coming February 28th against the Kelowna Rockets.

The Hitmen are definitely going to be well rested although the 3-day break over the league awards and Bantam Draft will also help the Rockets re-fuel in time for Friday.

The League will hand out it's annual awards on Wednesday in Edmonton with the WHL Bantam Draft set for Thursday in the Alberta capital.
Posted by Guy Flaming @ 11:02 PM

Quick note - Craig Schira isn't a free agent anymore. He signed a contract with the Ottawa Senators a few weeks back.