OK, I'm not going to base a tonne on tonight's win over the Flames, after all Calgary dressed just 15 skaters.

But 2 young guys looked pretty good to me. Defenceman Taylor Chorney was playing his first ever NHL regular season game, and goaltender Jeff Deslauriers started for the first time since last November.

Chorney played almost 15 minutes, mostly with former AHL and training camp partner Theo Peckham, and looked good to me. He didn't register a shot, a point or a plus minus rating, and seemed slightly nervous to start, but showed why the Oilers are excited about him. The former UND Fighting Sioux star jumped into the play several times and carried the puck well. I've said for a while now on TPS that I think Chorney could be a better NHL player than he was in the minors. Tonight's game doesn't prove that, but he did look fairly comfortable to me.

As for Deslauriers, he was really, really good. I don't care who was out of the line up for the Flames, the 2nd round pick from 2002 (and the only player from that draft crop that still has a chance at a career with the Oilers) was quick as a cat kicking out 31 Flames shots, including being perfect on 23 shots through 2 periods. I've always been impressed with his reflexes and lateral movement - he reminds me of a bigger Mathieu Garon - and tonight he was clutch when it counted. Can you imagine if he finishes the season with 2 straight wins. 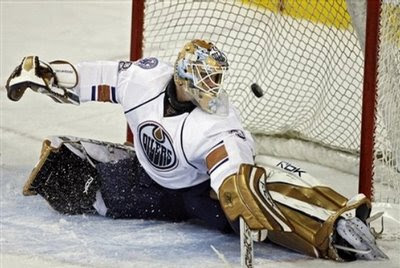 I'm not anointing him a starter in the NHL, but I will say this in my humble opinion. Whomever the Oilers sign as a goaltender next year, Deslauriers should start atleast 50 per cent of the games, to start the season anyway, to see what he can do over a larger body of work than the 9 games he saw action in this year while going 4-2.
Posted by Dean Millard @ 2:11 AM

I am one who wondered why Deslauriers hasn't shared in the Oiler goal tending. As good as Roloson can be (on some nights), he is also pretty darn porous on others. What was McTavish waiting for before he played this guy? A Roloson injury?

It's simple, Mac T didn't have enough confidence in Deslauriers to roll the dice with him. He went with what he knew, and that is something almost all coaches do. It should be noted that beating a Flames team with 15 players as an Oiler with nothing to lose is a lot different than beating Vancouver in a must win situation on HNIC. Thanks for the comment though.