A Top Ten Pick, At Least

So the Oilers finish 21st in the league, leaving them picking atleast 10th barring Tuesday's draft lottery, which for some reason is on TV.

The Oilers can move up to as high as 6th overall and here are some players that might be available in the 6-10 spots where they could be drafting this June in Montreal.

Jacob Josefson is a centre who plays in Sweden. He's 6.0 - 187 pounds and is a well rounded player, which is probably code for good but not great offensively. He did have 5 points at the 5 nations in February, but none were goals. Josefson is pretty fast and is playing for his country at the U-18's right now. So far he has a goal and 3 assists in 2 games. Josefson is ranked 10 by ISS. 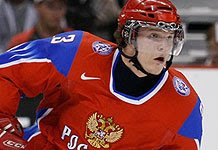 Dmitri Kulikov is a Russian defenceman who plays for Drummondville of the QMJHL. Kulikov's club has cruised to the Q league semi-final after back to back sweeps and now take on Memorial Cup hosts Rimouski. So far the 6.0 190 pound left shooting rearguard leads all blueliners in playoff scoring with 2 goals and 12 assists in 8 games. This after a 61 point regular season effort in just 54 games. He missed time this season while playing for Russia at the World Juniors where he notched 4 assists, and was plus 4 in 7 games. Kulikov is a potential power play qb who loves eying up forwards with their head down in the neutral zone. He's ranked 9th by ISS.

Nazem Kadri is hoping to play in a second straight Memorial Cup this year after helping Kitchener put on a great show as hosts last year. Kadri was part of the Steve Mason trade that sent this year's NHL rookie of the year hopeful to the Rangers from London. The odd part of the deal was that Kadri stayed in Kitchener until the start of this year and played in the tournament last year. Now he's the Knights second leading playoff scorer with 14 points in 9 games as London gets set to face Windsor in the OHL's semi-final. Kadri was hurt at Canada's World Junior camp and thus didn't make the squad, but he's had a terrific season with 25 goals and 76 points in just 55 games. He's only a shade over 5.11 and tips the Toledos at 180 pounds and while his skating won't wow you he is able to pull away from defenders with an extra gear when he has to. Kadri also isn't afraid to drive to the net. ISS has him slotted at 8. 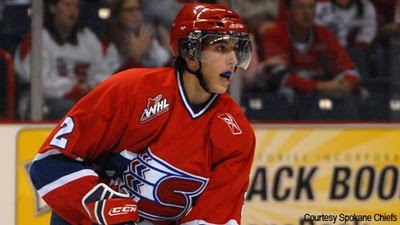 Jared Cowen at one point was a consensus top 5 pick, with some people slotting him in at #3, but the old saying "out of sight, out of mind" rings true with the Spokane Chief defenceman. Cowen suffered a season ending knee injury in January and since then has fallen in the rankings. Luckily scouts saw him quite a bit last year as Spokane won the Memorial Cup. The skinny on Cowen is anything but. He's over 6.04 and weighs in at 220, and is the prototypical shut down D-man.

Evander Kane, nicknamed after Evander Holyfield is also the real deal. His grandfather was a big boxing fan and scouts are liking what they see from this World Junior champ. Kane who skates with Vancouver of the WHL was originally cut from Canada's squad, but joined the team after Dana Tyrell was injured in pre tournament action. He played a nice enery role for Canada. With the Giants he's Mr. Offence with 47 goals and 95 points in just 60 games, the second best totals of any draft eligible player in the CHL behind only London's John Tavares. Kane is tough, smart and has terrific hands. He's right now ranked 6th by ISS.

Here a two other guys that the Oilers could be looking at, one would have to slip a little, the other the Oilers might be taking earlier than he's ranked or trading down for.

Brayden Schenn is 5th by ISS. He plays for Brandon and can score, hit and and play defence. Jordan Schroeder is 11th by ISS. He plays for Minnesota and has a wicked shot, but is a little on the small side. There are some questions about Schroeder's competitiveness as he put up big points against weaker teams in the WJC while he was less visible in the big games for team U.S.A.

If the Oilers want to trade down even later, guys like Scott Glennie, Zach Kassian and Carter Ashton are big forwards with some pretty nice skill that might fit the bill. And here's a second round pick for you to watch for. Tomas Vincour. The Edmonton Oil King has a lot of what the Oilers are either looking for or has worked for them in the past: 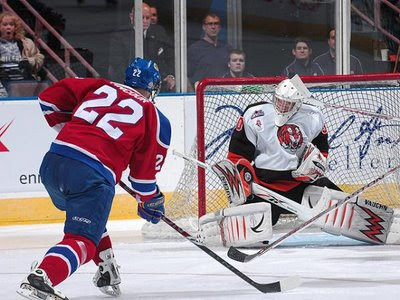 One final note, I've been reading here or there that Kevin Prendergast should take the fall for the Oilers struggles. I don't understand why some regular media members and some bloggers think this. I can't speak for the Oilers but I do think KP and his staff have done a nice job. Guy might have more on this soon, so I don't want to steal his thunder, but I will point out the following players that Prendergast has been responsible for. 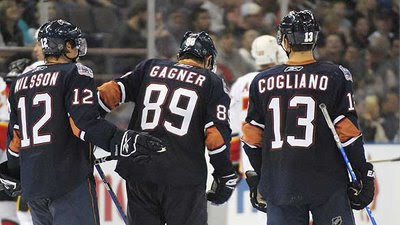 Time will only tell whether Taylor Chorney(2nd), Jeff Petry (2nd) or Theo Peckham (3rd) will pan out, but in the last 4 years Prendergast and his staff have done a pretty nice job, with players like Jordan Eberle and Phillipe Cornet enjoying good junior seasons this year.
Posted by Dean Millard @ 1:57 AM

Not a bad analysis of our chances. Though it should be pointed out that we can be picking as low as 11th as the teams behind us can still win the draft lottery and move up four spots.

I'm pretty high on Schroeder and Kulikov myself and all indications are that they'll be available around the 10-slot. One's another small talented forward which sounds quite repetitive on our team, and the other looks for all intents and purposes to be a solid defensive prospect with a playing style similar to our own Denis Grebshkov. I'd be happy with either of them.

I'm not that high on Glennie at all myself. He's getting a lot of billing along with Schenn that they're leading the way in Brandon, but I just don't find that at all true. The other bit players on the team are providing just as much to the scoring as Glennie and Schenn. I see the likes of Lowry, Stone, Clark and Fehr not to mention Aulie and Robak. It seems to me that both Schenn and Glennie are streaky scorers who put up big points in a couple games in a row but then disappear for stretches. I think they're both products of a very strong Brandon team.

Now the guy I really, really want is the swede Paajarvi. Solves the Oilers needs of a LW, increased size in the top-6 and grit all in a nice little Ikea box. I'd throw the second-round pick to move up into the 5-7 range to draft Paajarvi.

The thing I really like about Glennie is he kept the Kings afloat and tore up the league in December when Aulie, Schenn and Calvert were at Canada's WJC camp, maybe proving he makes his teammates better then they make him. Pajarrvi is one of the guys I mentioned recently on the show that I might take a ahead of Tavares or the big Swede. I love his skating, size, shot and attitude. Kind of reminds me of Forsberg a little.