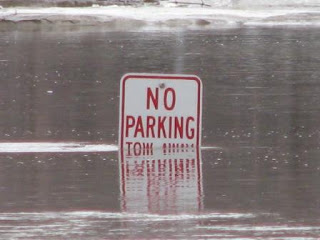 This picture pretty much says it all. The World U18 Hockey Championship is about to kick off in Fargo, ND but there are some pretty big hurdles for the tournament to overcome for it to be considered a success.

Brad Elliot Schlossman is a friend of The Pipeline Show. He covers the Fighting Sioux in North Dakota and has been keeping tabs on the U18s, especially now that UND hockey is done for the year. He recently had this post on his blog (always linked at the right).

It's not a pretty picture that Brad paints. It's unfortunate timing to say the least because, as Brad points out, at a time when the community has much bigger issues to deal with no one is going to be thinking about hockey. And those who are somehow able to use the tournament as a temporary escape from reality and try to attend... well, sounds like they have a horrible experience awaiting them on the way to the UPC as well. 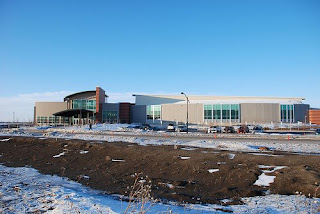 I've never been to the Urban Plains Center but from the scouts and players that I have spoken with who have been there, it's a great facility - on the inside. Aagin, Brad's description of the current mess surrounding the building might be enough to keep people away and if the flood waters actually do reach the rink you know that's going to kill any walk up, or wade up, crowd there might have been.

Television coverage of the event is sparse until the final few days. I believe that TSN in Canada is going to be showing some of Canada's final games and the medal round as well. It's unfortunate that there isn't more available because it sounds like TV might be the best way to take in the action.

Best of luck to those living in the area.

Email ThisBlogThis!Share to TwitterShare to FacebookShare to Pinterest
Labels: U18

I LIVE IN FARGO AND AM GOING TO THE EVENT. BRAD IS RIGHT ABOUT THE PARKING SITUATION ITS NOT GOOD.THE REST OF WHAT HE SAYS SOUNDS LIKE A CNN REPORTER. THE TOWN WILL BE FINE AND WE WON`T BE UNDER WATER WITH MASS CHAOS. SO CHILL OUT AND WE WILL SEE YOU IN FARGO.

Sounds good Paul... except the "see you in Fargo" part, I can only be there in spirit. Please stop back and leave some comments from ground zero so we know what's going on from the fan's perspective!