Omark on the Mark at Worlds

There were no hilite reel goals where he flipped it over the goalie in the shoot out, or scored from between his legs, but Oilers prospect Linus Omark (pronounced Leenus)indeed dazzled those watching the Sweden-Austria game. Omark set up the first 3 Sweden goals, then picked up assists on 2 more Swedish goals in the 3rd for a 5 point night. Omark was +5 and took 3 penalties. 2 for hooking, one for roughing. The 4th round pick from 2007 did it all while playing a shade under 15 minutes for the Swedes who won the game easily 7-1. 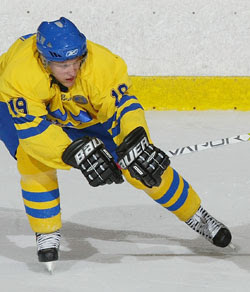 Sweden faces Latvia Monday and the U.S.A Wednesday, which is when the Oilers North American brass plans on getting to Zurich, as they are busy scouting the ongoing NHL playoffs.
Posted by Dean Millard @ 8:07 PM