Should Toews Get Olympic Consideration 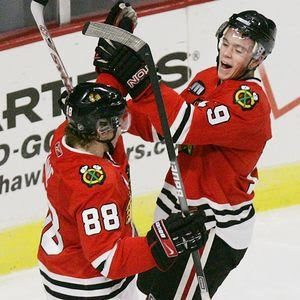 Toews was brilliant tonight for the Hawks as they took a 2-0 series lead against Calgary. He scored Chicago's first goal to cut the Flames lead in half, and finished them off with the winner late in the 2nd. He picked up an assist in game one and is plus 3 in the series so far. He's also been great at disrupting the Flames attack in the neutral zone.

Toews started the season slow without a goal in his first 12 games, but heated up when it counted helping Chicago sew up home ice advantage in the first round. The former North Dakota Fighting Sioux star had 17 points in his final 22 games, which might not be mind blowing, but consider he's one of their best defensive forwards and penalty killers. The middle man led the Hawks in face off percentage (54.7) and game winning goals (7) during the regular season and has won over 64 per cent of his draws so far in the playoffs. But it's more than that. He's the team captain and leads by example with his tenacious checking and clutch goal scoring. 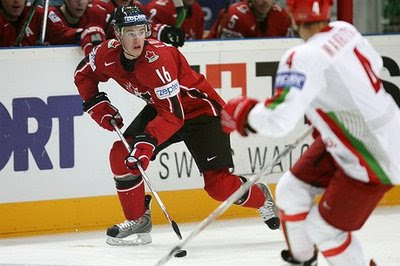 Of course the question surrounding Toews and the Olympic team is....Will there be room for him up the middle? Right now you have Crosby and Thornton as sure things. Then you have to choose from Getzlaf, Carter, Richards, Savard, Staal Lecavalier, Spezza and others. Of course some of those guys can and will have to move to the wing. I think Toews is smart and versatile enough to be able to play left wing and should get another chance to represent his country. He's previously done it with Canada at the U-17's scoring the championship goal, leading the tournament in scoring and being named MVP. Then there's the World Juniors, winning a gold medal as the team's youngest member in 2006 and of course getting them to the Gold Medal game where they would win again in 2007. Enjoy all 8:26 of it Canadian fans.

In the same season, after leaving North Dakota, Toews suited up for Canada at the World Hockey Championship, picking up 7 points in 9 games as Canada won gold again. In fact the only time that Toews hasn't won gold with Canada was last year when they lost to Russia in the final.

Toews is starting to become yet another great Canadian hockey player wearing #19. He's not there yet, but he's well on his way to joining Steve Yzerman, Joe Sakic, and Bryan Trottier (you know Brian Bellows favorite player-threw this in for pure enjoyment)

as two way stars who simply win when it counts. For me that gets Toews on the Olympic team next year, providing of course he's having a solid season. 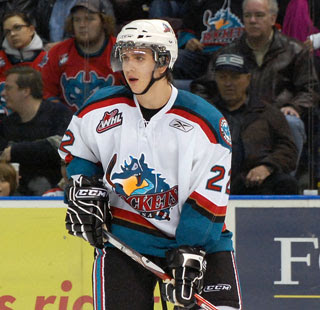 This Just In: Mikael Backlund is very good. The Swede who joined Kelowna after the World Junior Championship burned the Vancouver Giants tonight, scoring twice and setting up another as Kelowna drew first blood in the Western Conference final with a 4-2 win. Backlund scored an absolute beauty on the power play to get things going for Kelowna, then thread the needle with a terrific pass after chasing down a Giants d-man, stealing the puck and making a perfect pass to linemate Ian Duval. Backlund also picked up a helper on the empty net goal as Kelowna wins their 5th straight. There's a reason Guy and I both picked the Rockets to come out of the west before the playoffs started.
Posted by Dean Millard @ 9:49 PM

Toews should definitely be given consideration for being on the team. He and Crosby are great players and I believe that the two of them should join Iginla as locks. Also on the locks list is Doan, St.Louis, and Lecavalier.

The next tier of my forwards are Richards, Savard, Heatley and Staal. Cammalerri also needs consideration. The kid can fly. He could be an incredible penalty killer with Richards.

Darkhorses are Lucic and Kunitz.

Obscure choices are Brent Burns and Chuck Kobasew. Kobasew can do a lot and would be happy to be there. Burns could chew up 12 minutes a game with basically no error. Remember I said obscure.

Smyth and Nash should not get within 1000000000 miles of that team. Neither should Thornton.

Get Niedermayer on the team and that eats up 30 of 120 minutes every game. Find another dman who can play 25 relatively error free minutes a game (Bouwmeester or Boyle). Find another who can hit 2 a game. (Pronger or Keith) Now you have to find three more who can play roughly 15 a game without making too many mistakes (Weber, Boyle, Keith or Pronger). The specialized guy would be Green or Campbell. These guys could invert but my top 7 are (not in order) Niedermayer, Boumeester, Boyle, Pronger, Keith, Weber, Campbell. The next tier is Green, Wideman, Blake, Seabrook.

This team MUST revolve around its star players. The committee approach cannot work.

The lock in goal is Bobby Lu. The next tier of consideration must go to Brodeur, Ward, Steve Mason and MA Fleury (not in order). My inclination is that they will go with Luongo and Brodeur and that would make sense. If one falls, you know what you are getting.

Regehr will most likely get a spot at the expense of Weber.

Out of Kobasew, Lucic, Burns, Wideman, Cammalerri (I believe all are major longshots) Lucic could be a great fit.

I just don't see Heatley or Thornton as deserving to play. Thornton has amazing puck skills and, if motivated, is an elite player. But, he only plays when he wants to and is a major bust in big games and when he is needed most. He cannot elevate. Spezza is just not a good enough skater and just doesn't skate well enough.

We need to get away from using guys because they are endowed the position. To me, both Thornton and Spezza would be there on name. They just don't seem to give a flying 'you know what'.