One on One: Kyle Beach 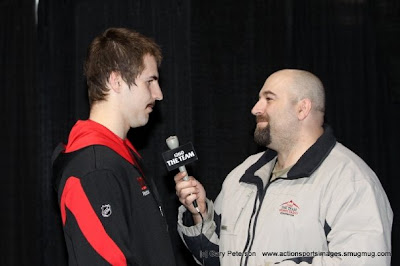 Recently the Spokane Chiefs rolled through town and with them this year is one of the most divisive players in the WHL. Kyle Beach is a player with followers in one of two camps: haters and believers. Every season Beach comes to Edmonton and he's wearing a different jersey and each time I make a point of speaking a few minutes with him. This trip through was no different and I was able to catch up with Beach for about 10 minutes prior to the game against the Oil Kings.

The photo above was taken during this very conversation; that would be Beach on the left (mustache is for 'Movember', a charity tradition to raise money for cancer research) and my ugly mug on the right. The picture was snapped by Gary Peterson who was along on the Chiefs' trip through Alberta and is compiling the photos he took into a keepsake collector's photo journal that will be a must-have for Spokane fans. Keep your eyes out for it! 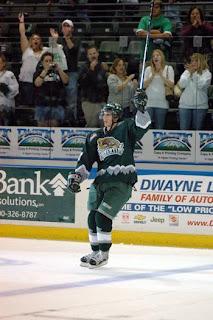 As for Beach, I've been able to carve out a decent enough rapport with him over the last few years that I'm sure he knows to expect to see me at the rink for our regular pre-game chat. His first time through Edmonton was with Everett and he scored one of those classic "scoop from behind the net and tuck in under the cross bar" goals. We turned that interview into a feature on the radio show combining comments from his Silvertips coach of the time, John Becanic. You can Hear that one by clicking HERE.

His next visit to Rexall Place was with the Lethbridge Hurricanes after a WHL trade deadline deal took him to the Alberta city. We chatted about that and also about his reputation that was continuing to dog him. You can hear that March 2009 interview by clicking HERE. And that brings us to this year. I started this conversation off by asking him about fitting in with a dressing room full of guys who used to have a first rate hate-on for him when he was with the arch-rival Silvertips. I was going to use Mitch Wahl by name but I think Beach knew where I was headed and decided to tackle that answer on his own.

"It's definitely been interesting... me and [Wahl] always had a battle within the game and now him and I are pretty much best friends. You can look at Ryan Letts who jumped me a couple of times and every time I was on the ice he was all over me... we're great buddies now, I mean we've even had a couple sleep overs!"

I'll admit i was struggling to keep a straight face when he said that and you'll here him chuckle a bit too, I think because he realized how awkward that statement sounded. 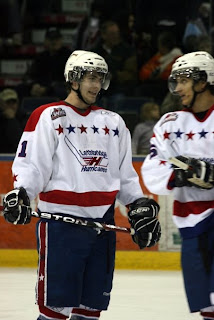 I was interested to hear how he would respond to my next question which was why he felt he was on his 3rd WHL team in less than a year. As I expected, he saw the positives of his situation and understood the way his former teams viewed his worth. Here is just a brief excerpt of what he told me:

"I think teams have tried to add me as a piece of the puzzle to make a run and unfortunately that didn't quite work out in Lethbridge but... we already have a great team here but if we can add one of two more pieces we'll be golden. Everett kind of rebuilt last year, got rid of me and got some great prospects. Lethbridge now rebuilding this year, traded me and got two very good defencemen, you look at what they've done and they've helped that team a ton."

I decided to lighten things up a bit by pointing out another difference so far this year: that he hasn't been suspended yet.

The interview always eventually gets to his past reputation but Beach says things are different now and listed a few reasons why that is, including having a guy like Ryan Letts on his team and simple maturity on his part.

"I'm growing up. I'm 19 now so there's no excuses. chicago's given me pretty strict guidelines... changing and maturing happens with age and now I just have to keep working on that and hopefully I'll win a couple more refs over."

Since he mentioned Chicago, the team that drafted him, I figured it was time to take the conversation in that direction. 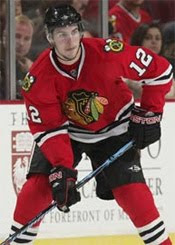 Some of you will recall that Beach joined Chicago's AHL affiliate after the Hurricanes were eliminated from the playoffs last Spring. His stay in Rockford was a short one as both he and fellow Hawks prospect Akim Alui were sent home for disciplinary reasons. Shortly after, former Lethbrdige GM Roy Stasiuk revealed on our show that the Blackhawks had sent the pair home for... a food fight. I asked Beach when the last time he had gotten into a food fight was, hoping for at least a small comment on the incident. Instead... I pretty much got a play-by-play account of the scene.

"It was a weird situation; there were three of us... Logan Stephenson, Tyler Mosienko and myself plus Akim Alui were all sitting there and we were debating which league was better: the OHL or the WHL. It was 3 against 1 and Aliu wasn't too happy so he dipped a napkin in teriyaki sauce and threw it on me. I grabbed one of those mini corn on the cob, threw it back at him and it escalated from there... and I got a full plate of food covering me head to toe in teriyaki sauce. I think we almost fought in the parking lot too..."

Naturally my follow us was to ask what the relationship is now with Alui especially after coming together again at training camp in the fall. I don't want to spoil it here so I'll let you hear what Beach said in regards to Aliu, his full account on the food fight and how things stand with Chicago these days. You can here the entire interview with Kyle Beach by clicking HERE and believe me... I highly recommend listening to this one, it still seems almost unbelievable to me.

I also talked to Spokane head coach Hardy Sauter about Beach and how he's fit in. Sauter admitted he had some concern ealry on considering Beach's history and reputation but made a point of stating that the player has been anything but a problem in their room or on the team. I asked the coach if he felt that Beach has been unfairly labeled as a delinquent and subsequently black balled by organizations like Hockey Canada (who haven't even called to ask the coach about Beach this year!). Sauter told me that he felt the criticisms directed at Beach early on in his WHL career were "fair" but again pointed out that the player has matured and there hasn't been a problem with him whatsoever this year.

I also asked Mitch Wahl who confirmed that he and Beach have become friends. Wahl described Beach as a person and player who every team in the league (and their fans) might hate but all of them would love to have him on their roster... once they got to know him. 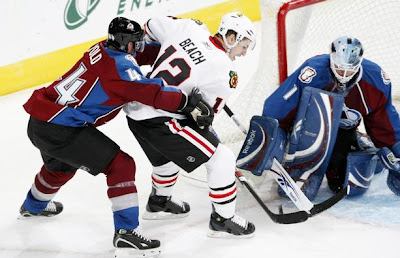 The Pipeline Show has always been willing to give Beach the benefit of the doubt; both Dean and I feel that Hockey Canada has been hypocritical in their obvious disdain for Beach while at the same time have opened their team to a player like Steve Downie. Both of us have taken some heat and ridicule for our support of Beach but honestly, we don't care. We see a player who as a youngster, possibly crossed the line of good sportsmanship [Lucic], wasn't afraid to stand up (with others) for his beliefs while with Hockey Canada [U17], plays on the edge with an intent to drive opposing players bananas and has a boat load of ability to play the game.

Beach currently has 19 goals in 22 games, the second best scoring per game ratio in the league behind Swift Current sniper Cody Eakin. He is second on team scoring behind Mitch Wahl who has a single point more than Beach but with 2 games more under his belt.

The fact that he was not invited to play in the Subway Super Series is an obvious declaration from Hockey Canada that despite his talent and value, Beach shouldn't expect a call for the December evaluation camp. And that is just a shame.

Maybe Hockey Canada should follow Beach's example and show some growth and maturity of their own.

He was very pedestrian when the Chiefs were here. Wahl was their best player, although both teams put up a bit of a stinker.

I'd argue that Koper and Reid were Spokane's best players that night.

Even the article is veeery interesting, I have to agree with Guy Flaming...Koper and Reid even more showed us in that game a great piece of their art. Great game!