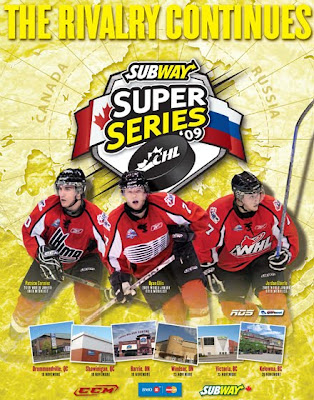 One of the guests that we were pleased to speak with on the program last night was an old favorite of ours, Sam Cosentino. You know him from Rogers Sportsnet where he's on both the baseball and junior hockey broadcast teams and obviously we were speaking with him about the latter.

Cosentino has a passion for junior hockey just like we do but has the advantage of covering all three CHL leagues on a first hand basis. That's why we enjoy having him on as much as we do (which is still not frequently enough for us or for him). Yesterday we were able to pick his brain about the ongoing Subway Super Series and got his scouting reports on CHL players, the Russians who made it over, the Mike Liambas suspension and what the difference is in the case of Zac Rinaldo plus... I got to throw my alternative to today's Super Series at him.

We started by asking Sam to offer up the names of some of the players that have caught his eye over the first four games of the series (QMJHL and OHL). He started with the Russians and offered some comments on a few of the imports who are actually playing in the CHL including Dmitri Kostromitin who was an invite to Oilers rookie camp in September. However, it was 2010 eligible Maxim Kitsin that scored the best praise from the TV colour analyst.

"I think he's been fantastic, probably their most consistent goal scoring threat."

Cosentino continued to comment on Pavel Lukin and Dmitri Kugryshev.

On the CHL side of things, Cosentino suggests that Taylor Hall and Nazem Kadri were two key guys for him to watch. Out of the QMJHL he made special mention of Luke Adam and Gabriel Bourque. From the WHL the guys he says he is looking forward to seeing in action include TPS Guest Player Blogger Brett Connolly of the Prince George Cougars, Edmonton Oil King Mark Pysyk and Jordan Eberle who wowed him earlier in the day at practice.

"[Eberle] was tearing apart the shootout portion of the practice." 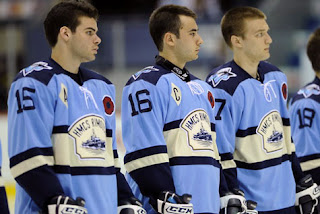 Dean then brought up something he has noticed over the first few games of the series in that the CHL clubs have featured a couple of interesting lines. In the Q games we saw an all-Rimouski combination in Jordan Caron, Patrice Cormier and former Oceanic winger Philippe Cornet (#15 above). There was an all-Spitfires line in the OHL games with Taylor Hall, Adam Henrique and Greg Nemisz. Millard asked Cosentino if he felt this was something that might carry over to WJC camp.

"When you look at the chemistry that those two lines have had you can't help but look and say 'boy, if we bring these guys to the camp and they can compete in the red/white events and on an individual basis maybe it is plausible that we keep these guys together come tournament time."

That led into a question on Oilers prospect Philippe Cornet who, despite a pile of points and an impressive Super Series, both Dean and I get the impression from Hockey Canada that they might be look warm to him. Cosentino had a different perspective.

"Smart player. Really smart player and I don't necessarily think I agree with [our] assessment. I've been sneaking around with coaches and scouts and I think they were particularly happy with his game. I thought Cornet played both ends of the ice extremely well, positioned himself great, had some good back tracking and defensive plays coming back into the neutral zone. I liked his game and I think [Hockey Canada] is probably a little more than 'luke warm' based on some of the people I've talked to."

I asked Sam if there was a player he felt had earned a camp invite with the way he performed during the series and he suggested a player from the QMJHL fit the bill.

"I think Gabriel Bourque is that guy for me right now. He was awesome in the two games; great energy, has no issue at all getting involved physically, able to put up points but able to be the pain in the rear end guy."

Sam offered up a few other names as well during the first segment of our conversation.

We then directed an email question Sam's way which asked about suspended London Knight Zac Rinaldo who was somehow eligible to still partake in the Super Series. We ended the first segment with that question and when we came back from a commercial break we picked up right where we left off and asked Sam to comment on Rinaldo's history of suspensions in light of the career ending suspension handed out recently to Mike Liambas.

"I'll be perfectly honest with you guys... I think the [Liambas] suspension was too long."

Sam went on to clarify his position on that incident and what he would have liked to have seen as the penalty and made a solid explanation as to why he's taken the stance that he has. 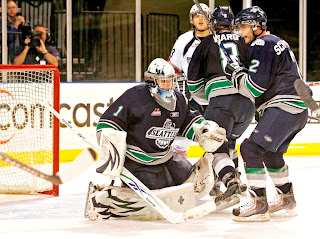 Dean made a great point that, with just two goalies playing for the WHL in the next two games of the Super Series, it's clearly Martin Jones VS Calvin Pickard (above) for Hockey Canada in terms of a camp invite. Cosentino agreed and went on to describe how he envisions the goaltending battle shaking down in advance of the World Junior Camp.

"Jake Allen - invite. After that it kind of breaks down a bit. The next guy I have on my list is Matt Hackett of the Plymouth Whalers. The last two camp spots if they go with four goalies... is a fight between the two WHL guys, Pickard and Jones, and I would throw Louie Domngue of the Moncton Wildcats in that group based on how well he played at the Ivan Hlinka tournament."

Edmonton fans will notice that summer camp invitee Olivier Roy doesn't make the cut for Cosentino (nor for Dean or I as far as that goes) based on a weaker season than the others on the list.

"He's a guy that I really thought going into this year, would be a cinch to make one of those four spots but I'm not so certain of that now."

We then brought up the name of Kyle Beach and whether Sam was surprised that the power forward isn't playing for the WHL after finally getting that chance last year.

"Yeah a little bit, I mean, he's lighting it up right now. This is a guy that, let's face it, they are very familiar with." Cody Eakin has been a scoring machine this year and Dean wondered if the Swift Current sniper might be this year's Jamie Benn or Brett Sonne.

"I think he can be that guy to play the role where he's needed to go out and create an opportunity or get a couple of good shots but also to play a defensive posture."

Finally, I pitched my idea to Sam about having the Russian component in the Super Series changed to a European/American squad from the CHL. Although he liked the idea in theory, Sam pointed out that in the end, it's money that dictates the structure of the event.

"To this point guys, it's selling. Would you like to see better competition if you're Hockey Canada? Yes. For Television? Yes."

Sam's point was that because the advertising around the event is sold out, there is not indication that a change is needed and that in fact, removing the Russian aspect from the Series might have a negative effect on sponsorship.

"I love the idea of the international [roster] event but it would take a huge marketing endeavor to try and sell that. Believe it or not, when you go around, Canada vs Russia still sells."

Sam's counter proposal would be to have a series that would pit the QMJHL against one of the Eastern based NCAA Conferences like the ECAC. The OHL could play the CCHA and the WHL would square off against the WCHA. I am not sure that NCAA regulations would even allow such an exhibition though.

It was a very informative and entertaining double-length interview with Sam which you can hear by clicking HERE.
Posted by Guy Flaming @ 7:26 AM