~
Each season there are a number of players who seemingly take a giant leap forward in their development from the year previous and it's reflected in their stats. One year they are a 20-40 point player and the next they're setting new personal bests in all categories by Christmas.

Here are 5 examples of players having breakout seasons in the WHL this year: 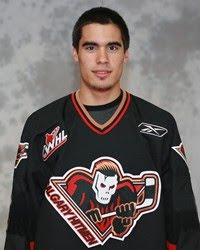 The Hitmen forward has already equaled his previous record for goals in a season, in fact he did it on opening night. Fiddler's hat trick against Red Deer was as many goals as he scored in the entire 2008-09 season in 64 games with the mighty Calgary club. Since then he's scored 7 more goals and has 18 points, 5 shy of his total from last season. Obviously, with the loss of some key players over the summer, opportunities have been there for Fiddler this year and he's made the most of them. Only WHL leading scorer Brandon Kozun has more point amongst Hitmen players right now and he has three more goals than former 50-goal man Joel Broda currently does. Fiddler turned 19 last June and does not have ties to any NHL team at the moment although you'd have to think that will change if he continues to produce at his current rate. 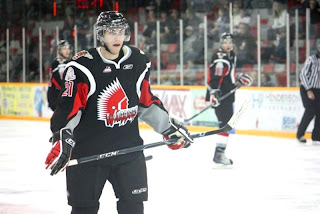 Like Portland, the Moose Jaw Warriors were brutal last year. One of the team's marquee players is Quinton Howden, a probable 1st round pick in the 2010 NHL Draft. Despite his skills and abilities, Howden only managed 30 points last season. One of the reasons the Warriors are well out of the basement right now is because of the success Howden is having in his second year. Already the 6'3 forward has 20 points, on pace for a +80-point campaign which would look very good heading into the draft. He's also on the radar for Hockey Canada as they prepare for the WJC in Saskatoon/Regina. 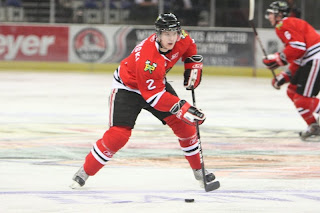 The Edmonton product is having a strong season with the resurgent Winterhawks and has already surpassed his totals from 2008-09. After only 19 games Rutkowski has 7-13-20, 5 points ahead of where he was at the end of his 64-game schedule a year ago. Great timing too considering it's his draft year and with so many 2010 eligible players on that impressive Portland squad, the scouts are out in full force whenever and where ever the Hawks are playing. I've had some people tell me that they question his defensive play but his +6 rating is a massive improvement from his -22 although one could argue that the team is better as a whole so everyone's numbers would reflect that to some degree. Still, he's one point back of Travis Hamonic for the league lead in scoring by defencemen and he's still just 17-years-old. 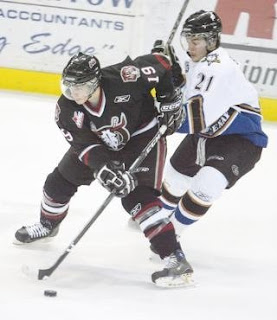 The B.C. native had a decent year with the rebels in 2008-09 and ended the schedule with 18 goals and 42 points. One could argue that that was his breakout year but considering he went unselected in the draft I'm going to suggest that this is his season to really make a name for himself. Too late for everyone else though, Detroit invited him to their camp after the draft, liked what they saw and signed him as a free agent. Perhaps that has something to do with his confidence and production this season but Coetzee already has 29 points and is second in WHL scoring, just two points behind Kozun. You can hear more from Coetzee himself as he was one of the Rebels that Dean Millard chatted with over the weekend in interviews we will air tonight. 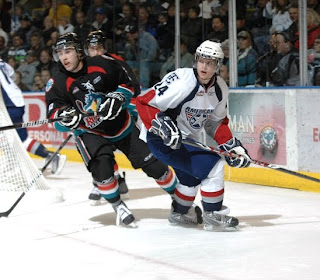 This Winnipeg kid had 25 points as a rookie with Tri-City last year and has already surpassed those numbers this season. Shinnimin has a dozen goals and 16 assists for 28 points and he's only played 16 games. The 5'09 center will turn 19 in January and is not currently property of a NHL team so it will be interesting to see if he gets drafted in June or if he gets overlooked because of his size. Shinnimin recorded 9 points in his first three games this year and has been held off the score sheet only 4 times. Shinnimin's success hasn't gone unnoticed as he's been added to the WHL roster for the Subway Series game being held in Victoria on November 25th.
Posted by Guy Flaming @ 11:50 AM

You could put Bretton Cameron of the Medicine Hat Tigers in this group easily. From an injury filled season last year and only 22 points to 30 points this year and being 3rd in league scoring.