Top 5 Tuesday: Underagers to watch for at Canada's camp

Last year three 17 year olds were cracked Canada's World Junior roster that won a 5th consecutive gold medal. They were Ryan Ellis, John Tavares and Evander Kane. 3 more were invited to the December camp, along with 2010 eligible player Taylor Hall. Hall is a no brainer for this year's club. Here are 5 other underaged players who - according to The Pipeline Show - have a shot at atleast getting invited to camp, along with one wild card selection and a goalie.

WC. Ryan Nugent-Hopkins, Red Deer Rebels
This is my wild card and long shot, as RNH isn't draft elible until 2011. But that was the case with Taylor Hall last season. The former first overall bantam pick has been lights out with 27 points in 25 games this year in Red Deer. 13 of his points have been goals. The Burnaby boy is already being pegged as a possible first overall pick in the 2011 draft, and while he hasn't been as dominant as guys like Hall, John Tavares or Steven Stamkos were as 16 year olds, he is very good.

G. Calvin Pickard, Seattle Thunderbirds
He has the 9th best goals against average on the 3rd worst team in the WHL. Calvin Pickard is the younger brother of former Tri City netminder and Nashville first rounder Chet, who played for team Canada at the WJC. Some think he'll out grow Chet's shadow, and become an even better goaltender. Canada rarely takes an underaged goaltender, but could it really hurt to invite him to camp? He has past experience having suited up for Canada's U-18 squad. If he stands out in the upcoming WHL-Russia games during the Subway Super Series he has a chance. Ironically he's playing with Martin Jones who was the only WHL goalie invited to the summer camp.

5. Mark Pysyk, Edmonton Oil Kings
If you don't know Pysyk, meet Mr. Everything for the Oil Kings. He quarterbacks the power play, kills penalties and neutralizes the oppositions best players, and he did all of that last year as a 16 year old. Pysyk for my money is the team's most important player. He's just 7 points shy of matching his total from last year. The only aspect of his game that isn't there yet is a nasty edge, and I'm not sure it will ever be there. 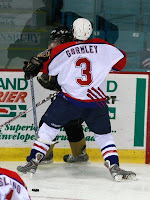 4. Brandon Gormley, Moncton Wildcats
Gormley is a lot of things that Pysyk is, but according to one scout I spoke with, is a new notches above because of his better offensive ability. His 27 point total will be surpassed this season for the Wildcat defender. Gormley was Canada's top blueliner at the Ivan Hlinka tournament this summer, notching 3 goals and adding as assist in 4 games as Canada captured the gold medal. If Canada takes an under age blueliner, the 10th leading scoring defenceman from the Q will get the call.

3. John McFarland, Sudbury Wolves
He tried to get special status to play as a 15 year old, but was denied by the OHL. However I don't expect the Sudbury Wolves forward to suffer the same fate from Hockey Canada, atleast when the camp invites go out. Sudbury drafted McFarland first overall and he notched 52 points as a rookie last year. I like his size and skill, and while he likely won't crack the final roster, he should be at camp. 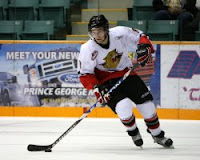 2. Brett Connolly, Prince George Cougars
The CHL's reigning rookie of the year, who notched 30 goals and added 30 assists isn't having the start to the season he was expecting. A hip problem has limited Connolly to just 7 games this year and he hasn't played since October 3rd. He did have 6 points in 7 games, which is pretty good for a guy playing through an injury he suffered at the Ivan Hlinka tournament. When healthy he's a dominant sniper, and if he returns in time, it'll be hard for Hockey Canada to ignore. When Dana Tyrell was injured last year, at Canada's selection camp, and didn't return to Prince George, Connolly actually became a better player.

1. Tyler Seguin, Plymouth Whalers
He's fast, tenacious, and highly skilled. He's also overtaken Taylor Hall for the 2010 draft according to NHL's Central Scouting. The Plymouth Whaler was neck and neck with Hall for the OHL scoring lead early in the season, but a hip flexor cost him 6 games. However he's back now and it will be hard for Canada to ignore when the final cuts come. Seguin could end up as a rarity, of getting cut this year and not being available next year because he's in the NHL. The same thing happened to Matt Duchene who cracked the Avalanche and Michael Del Zotto who's starring on Broadway with the Rangers this year.

Of course not all of these guys will get invites, but some of them will and a couple could crack the final roster. We'll be discussing this and a lot more tonight on TPS with NHL Central Scouting's EJ Mcguire and Rogers Sportsnets Sam Cosentino. Also scheduled to join us is Spokane Chief and the anti Hockey Canada player Kyle Beach, Flyers rookie James van Riemsdyk, and Alaska Nanooks head coach Dallas Ferguson. 7-9 PM MST on the TEAM 1260 in Edmonton or online at www.thepipelineshow.com. Drop us a line at pipeup@theteam1260.com.
Posted by Dean Millard @ 6:00 AM

Out of curiousity, when does the invite list go out?

Early December doritogrande, after the Super Series is done.

you are right anon, but he receive a camp invite at 16, and that is what this list is all about, getting an invite to camp.

Actually neither Hall nor Stamkos nor Tavares got an invitation as 16 years olds. While Hall and Stamkos are late born, they were all 17 years old when they got their first invitation (Stamkos and Hall were during their second OHL seasons and Tavares in his third).
Hall (born 91) - Dec. 08
Stamkos (born 90) - Dec. 07
Tavares (born 90) - Dec. 07