~
The Oilers have recalled centre Ryan O'Marra for a second stint with the big club, and he's brought along his partner in checking Colin McDonald (pictured). 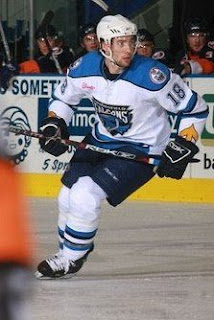 The pair have been the Springfield Falcons shut down line on the farm and have developed some nice chemistry. This will be O'Marra's second call up this year, you can read about his first stint here.

If McDonald gets into game action it will be his first in the NHL, and proof that the Oilers might be salvaging what was once thought to be lost career. The Hartford product was a scorer before attending Providence College where the offence was sucked out of him, never registering more than 13 goals in a single season. His AHL career wasn't much better until Springfield Head Coach Rob Daum asked him to play a checking role, a role in which McDonald thrived in, starting with the final stretch of last season. With a defined job, McDonald's offence is starting to show signs of life. His 5 goals in 21 games, puts him just 7 shy of his career high.

O'Marra and McDonald sit 5th and 6th in Falcons scoring right now. It's unfortunate that injured forward Chris Minard misses out another chance to join the Oilers. Charles Linglet, Colton Fretter and Chad Wiseman are all above or near a point per game pace, but will have to wait for their turn, which by the way the Oilers are getting hurt might not be that long.

The interesting transaction in this announcement is that Liam Reddox has been "loaned" to Springfield. I'm not sure why, maybe it's to circumvent the waiver process or just another way to say 'sent down'???

While this is great news for O'Marra and McDonald, it means the Oilers must start scrambling to find capable players to fill out Rob Daum's roster in Springfield.
Posted by Dean Millard @ 11:59 AM

"The interesting transaction in this announcement is that Liam Reddox has been "loaned" to Springfield. I'm not sure why, maybe it's to circumvent the waiver process or just another way to say 'sent down'???"

I thought the term "loaned" being used was interesting as well but it seems that the AHL refers to most player movement as being "loaned":
http://theahl.com/stats/transactions.php?showFull=1&f_season_id=30&f_team_id=0