~
Another interesting week in College hockey which should go a long way to sorting out the early season mess on the Top 20 poll. Speaking of which, here is how the rankings looked heading into the weekend (results after brackets): 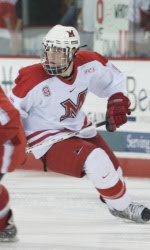 We start at the top each week and that means a look at how #1 Miami made out and again, the RedHawks continued to play well and swept the #4 Michigan Wolverines in their own building. Miami only had 13 shots on Friday but senior Jarod Palmer's two first period markers were enough in a 3-1 win. Cody Reichard made 27 saves for Miami. On Saturday, the score ended up 5-1 and was a little more indicative of the play as Miami recorded 29 shots to Michigan's 21. The RedHawks spotted the Wolverines an early 1-0 lead but scored 5 unanswered goals to win their 4th straight contest. Miami now has a 8-1-1 record and will hold on to their #1 seeding and might actually sweep the first place votes.

Rhett Rakhshani scored twice for Denver in their Friday night 3-2 victory over Alaska-Anchorage. One of my pre-season Hobey Baker contenders, Rakhshani leads the Pioneers with 12 points after scoring again on Saturday in a surprisingly lopsided 7-3 loss to the host Seawolves. Lee Bladwin had 3 points for Anchorage who also had 2-point efforts from Sean Wiles, Tommy Grant and Swede Daniel Naslund. The loss to an unseeded team should mean a drop for Denver, perhaps as far as to the 4th or 5th seed depending on how punishing the voters get. 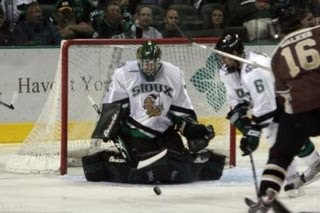 Certainly the team that should take over for DU as the #2 program is North Dakota who swept their way over Michigan Tech with two road victories. Four different goal scorers for UND on Friday in their 4-2 win as they put up 41 points on the shot board compared to Michigan Tech's 23. Saturday didn't get any better for the Huskies who went down 4-1. Evan Trupp scored twice for the Sioux and both Chay Genoway and Danny Kristo collected their third points of the weekend series.

The Big Red of Cornell are off to a decent start as they've improved to 3-0 as expected against relatively weak competition. They pasted Dartmouth by a 5-1 score on Friday and followed that up with a 6-3 win over Harvard on Saturday. Blake Gallagher scored twice and both Nash brothers (Brendon and Riley) had a pair of helpers against Dartmouth. Saturday was the Devin show as Mike and Joe combined for 7 points as the Big Red scored five unanswered goals to complete a comeback against the Crimson. Senior Ben Scrivens has started all three games for Cornell. 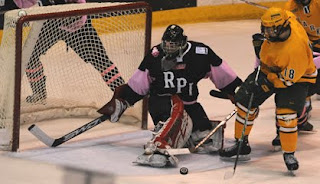 The #6 and #7 teams took big steps back this week as Yale and Boston University both suffered defeats. Let's start with Yale who were upset by R.P.I. on Friday by a 5-2 margin. Broc Little got both Bulldogs goals but former Camrose Kodiak Allen York (CLB) "Engineered" 34 saves for the home squad; he now has a 5-2-1 record with a .916 save percentage. Yale then had to comeback from a 3-1 third period deficit to equal lowly Union who are just .500 after 6 games. The Dutchmen got two goals from Kelly Zajac in the tie whereas Sean Backman scored twice for Yale and of course, Broc Little got his pre-requisite goal as well. Only getting 1 of a possible 4 points should lead to a large tumble for Yale down the poll standings and should finally put an end to the first place vote they've received each week, seemingly since Labour Day.

As for the Terriers, well things went from bad to worse as the defending champions who had yet to sweep a weekend series this year... lost both of their games and now sit in the cellar of the Hockey East standings. First it was a 1-0 shutout loss to Northeastern and that was followed up by a loss to Maine who offered up a 3-2 slap to the face. To be fair, BU peppered Northeastern goalie Chris Rawlings with 43 shots on Friday in the loss. Saturday they outshot Maine 28-18 and still took the hit in the standings. Kieran Millan's (COL) stats took a hit as well as he made just 15 saves against the Black Bears. One bright spot for BU: Freshman Alex Chiasson leads the club with 4 goals... the downside, defenceman Kevin Shattenkirk's 7 points are also a team high. This team just can't score goals this year! I know they are the defending champs and are a better team than their record shows but... they're still 2-5 overall and the poll needs to start reflecting that! 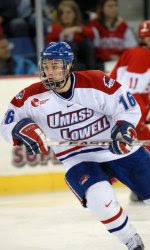 Meanwhile, Mass.-Lowell picked up a win and a tie and should move up a couple positions at least. The River Hawks sit atop the Hockey East standings after a tie with Vermont and a win over New Hampshire. Nevin Hamilton made 34 saves for the River Hawks on Friday night to preserve the tie and then Carter Hutton stopped 33 more on Saturday as they trounced UNH 6-3.

#9 Notre Dame and #13 Alaska-Fairbanks split their weekend series and should be ranked pretty close together I would think. The Nanooks held the edge in shots on Friday by a 37-17 margin but it was the Irish that took away the 3-2 victory. Mike Johnson was in net for Notre Dame who got a two-point game from Kyle Lawson. Derek Klassen scored twice on Saturday for Alaska who took the rematch 3-1.

One of the best series of the weekend featured a pair of teams that no one is really quite sure how serious to take just yet. I think that's starting to change though as both Nebraska-Omaha and Michigan State played well in their meeting which they kinda, sorta... split. The Spartans took the abnormal Thursday night affair by a 3-0 score on the strength of Drew Palmisano's 31-save shutout. The Mavericks exacted a bit of revenge on Friday by "winning" a shutout against MSU, although keep in mind that in the standings it's still a tie (STUPID).

Bemidji State currently holds the best record in the NCAA. At 7-0-1 the Beavers are one of two unbeaten teams; Cornell is the other but have only played 3 games. This weekend the Beavers handled the Colonials 2-0 and 6-1. Bemidji's trip to the Frozen Four last year has Tom Serratore's squad playing confident hockey this season and Robert Morris was not up to the task of being the first team to take one from them. The Beavers are balance; leading scorer Matt Read only had 1 point in the 6-1 romp although he had two in the 2-0 game on Friday. Bemidji State will have a tough measuring stick opponent on their hands next week when they take on non-conference rival Minnesota.

Speaking of the un-ranked Golden Gophers, they managed to claw out a split against the #18 Badgers of Wisconsin. Blake Geoffrion continued his strong season with two goals on Friday night pacing the Badgers over the Gophers by a 4-2 score. Saturday belong to Minnesota though as they pulled out a 4-2 win. Shot totals over the two games were completely in Wisconsin's favor as they outmatched Minnesota 79-46 yet still came out behind in total goals scored and had to settle for the split. Freshman Zach Budish and Tony Lucia both had a 3-point performance on Saturday for the Gophers.

A team that should be climbing up the poll is Massachusetts after they rattled off a pair of wins against Niagara. The lesser team might not help the Minutemen's progression up the top 20 all that much but considering they hold down a 6-1 record and sole possession of second place in Hockey East, Mass deserves a bit of recognition for what they have managed so far which includes a win over BU.

Quinnipiac won both of their games on the weekend so the ECAC program might make its way back onto the tail end of the top 20. They beat both Clarkson and St. Lawrence, weaker Conference rivals so their gain might not be significant enough for the voters.

Bowling Green went 0-2 after losses to Ferris State. Not really worth bringing up but I wanted someway to lead into what is becoming one of my favorite hockey sweater. The Bowling Green Falcons have a very loud jersey that might be bordering on too loud... but it isn't. It's really sharp in my opinion. I just have one small problem with it: would it make more sense for any other NCAA team to have this colour scheme? Maybe it's just me but what about that jersey screams Bowling GREEN?