A Candidate For The Kamloops Coaching Job

It's funny the things you hear about when it comes to junior hockey, while at an NHL practice. After the Rangers skate in Edmonton this morning, I found there's a new candidate for the Kamloops Blazers coaching job, and it sounds like the Blazers are doing more than just kicking tires. 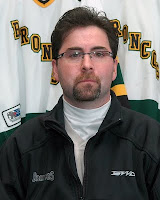 Word is Humboldt Broncos bench boss Dean Brockman is flying to Kamloops this weekend to meet with management about the post currently held by interim head coach Scott Ferguson.

Brockman, who was close to getting the job in Regina before Curtis Hunt became available, has nothing left to accomplish in Humboldt. In his 11 years with the Broncos he's guided the team to 4 league titles, 3 trips to the Royal Bank Cup and 2 national titles.

He'd make a great choice as coach, and I've been told will make a really good G.M. someday. If he does get the job, it's long overdue.
Posted by Dean Millard @ 2:04 PM

Nice reporting there buddy. Bonner has said that the rumors are completely false and that he won't even be in Kamloops on the weekend.

we'll see. Do you think he would actually admit this in public? My source is pretty good on this.

If true when is he planning on making the hire?

we'll see, depends on how the team plays I guess.

I find it interesting that the word out of Humboldt is "no comment" instead of "no, I have not had any conversation with anyone from the Blazers".

Big difference in my opinion.