~
There was a ridiculous amount of upsets this past weekend and if I thought the top 20 rankings got a lot clearer 8 days ago... well they're all messed up again now. Here is how they looked on Friday morning with results in brackets. 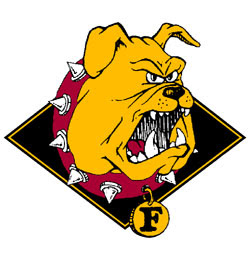 The RedHawks suffered a fairly significant set back without actually losing a game; they tied Ferris State twice. 2-2 and 1-1 were the official scores, Ferris actually won both of the shootouts giving them the interesting record of 2-2-2-2 after six games. 4 different goalies saw action as both teams went the tandem route for the back-to-back games. Miami outshot the Bulldogs by an overall margin of 72-54 but it was the road team that takes away the positives from the meeting. It's probably reasonable to expect that the RedHawks will surely fall from their perch atop the poll as a result of the two ties.

Then again, #2 North Dakota only managed to split their weekend series with the Huskies from St. Cloud State. The Sioux won Friday's tilt against a team without offensive leader Garret Roe who was suspended for "violating team rules". David Toews struck twice for UND while Ryan Lasch recorded a goal and assist for SCSU. saturday the tables were turned as St. Cloud opened up a 3-goal lead and hung on for a 3-2 win at intimidating Ralph Engelstad Arena. Freshman Aaron Dell allowed 3 goals on 6 shots, was yanked, and replaced by stalwart Brad Eidsness 14 seconds into the frame and barred the door the rest of the way. At the other end of the rink, Dan Dunn stopped 47 of 49 shots to earn the victory. 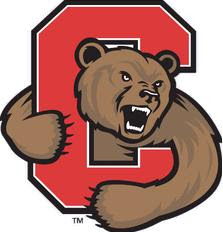 So you might be wondering Cornell might be able to leap over the stumbling RedHawks and Sioux but wait... the Big Red faltered as well. Cornell was doubled up by Yale on Friday but exacted revenge on lowly Brown Saturday to come out with a 1-1 split. The Bulldogs got goals from 4 different shooters to outlast the Big Red and hand them their first loss of the season. Cornell found its offence the next night putting 6 behind Mike Clemente in Brown's net. Interestingly, Edmonton Oiler first round pick Riley Nash didn't record a point in the blowout game. Cornell's 4th goal against Brown was an empty netter at the 17:39 mark of the third. Brown had pulled their netminder to try and stage a comeback while the game was still just 3-0; unfortunately for them, Cornell scored and then put two more past Clemente who had returned to finish out the game.

#4 Denver was off for the week... could they moved up to #1 without even having played a game?

UMass.-Lowell might have an argument to make for the top seed after being one of the very few teams to win both of their games. Unfortunately for the River Hawks, their wins were over unranked Alabama-Huntsville who have now lost 6 straight. I don;t know if that will be impressive enough to win them a lot of votes.

Well certainly the Michigan Wolverines will be moving the wrong way on the top 20 list after dropping both ends of a home-and-home against their Spartan arch rivals. MSU scored 3-2 and 2-0 wins and moved into sole possession of first place in the CCHA standings, ahead of even the Miami RedHawks. Could Michigan State vault from #13 all the way to the top?? Probably not but considering the CCHA standings and the fact that the RedHawks and Spartans split their series in October, the committee is going to have to recognize that the gap between the two clubs can't be considered that great anymore.

The Bemidji State Beavers are no longer unbeated after taking it on the chin Saturday night at the hands of the Minnesota Golden Gophers. In the opening battle of the small furry animals, Minnesota scored a 4-1 win but that would not carry over to Sunday's rematch. The Beavers pounded Minnesota 6-2 to even the weekend with their non-conference but inter-State rival.

The luck of the Irish continues to be bad as Notre Dame went 0-1-1 against Northern Michigan, one of the few teams below them in the CCHA standings. Brian Stewart made 36 saves for the Wildcats on Saturday as his club bested Notre Dame 3-2. Sunday's rematch ended in a 2-2 tie after Bill Maday scored twice to erase a two-goal Wildcat lead. The Irish would went on to win the shootout. 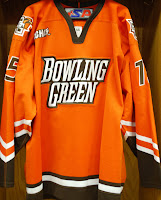 I thought Alaska had a gimmie weekend in store against last place Bowling Green but the best jerseys in the conference helped the Falcons get a split against the #9 ranked Nanooks. Bowling Green won the opening game with a 3-1 final but couldn't repeat the next night and gave up five in a 5-3 loss. Don Knelson and Jarret Granberg both scored twice in Saturday's game for Alaska.

You know, for a team that most expected to struggle this year, kudos have to go out to the Colorado College Tigers. Two more wins this weekend should lift the #10 team at least three positions. Rylan Schwartz scored the lone goal in a 1-0 win on Friday and he also assisted on the GWG Saturday in CC's 3-2 win over Minnesota State. Goalie Joe Howe has lost only 1 of his 9 starts and has a .934 save percentage to go along with his 2.08 GAA.

#15 Vermont and #16 Boston College hooked up and split their two games. BC trounced the Catamounts 7-1 but Vermont was able to rebound and take one from the Eagles by a 3-2 score. Jimmy Hayes had four assists in the opener for the Eagles during which they only accounted for 19 shots on goal in total - and scored 7 times! BC's power play went 3-4 in that game but were 0-4 the next night in their loss.

The Terriers from Boston University have been battling injury and illness and it cost them on Friday when the upstart Merrimack Warriors welcomed their visitors with a 6-3 kick in the junk. Kieran Millan was pulled after the fifth goal against, he'd face just over 20 shots a few minutes into the third period and it was 5-1 for Merrimack. Saturday the scene shifted back to BU's barn and the home side pulled out a 6-4 goal-fest. BU opened the game with four first period tallies and this time it was Merrimack's goalie who was pulled as Andrew Braithwaite was pulled after the first period in favor of Joe Cannata who helped the Warriors win the last two periods.

Speaking of scoring in bunches, Minnesota-Duluth beat Michigan tech 8-1 on Saturday but unfortunately for the Bulldogs, that was on the heels of a 3-2 upset loss the night before. Steven Seigo had two points for the Huskies in the win for Michigan Tech but that hardly measures up to the night that Mike Connolly and Justin Fontaine had in the rematch. Connolly came away with a goal and 4 assists while Fontaine scored 4 times and added a single helper; 10 points between the pair of former AJHL stars! Fontaine currently leads the NCAA in scoring with 18 points and a 1.64 pts/game pace second only to Merrimack's Stephane Da Costa (1.88) after just 8 games.

The Quinnipiac Bobcats captured both of their games so should see some movement upwards on the poll. With an overall 8-1-0 record, on paper they sound impressive but I'd like to see how they fare against the "better" programs in their conference let alone teams from outside the ECAC. with apologies to St. Cloud, Quinnipiac's non-conference schedule this year is quite weak.

Ryan Lambert of Puck Daddy / Yahoo Sports had a very entertaining story last week. "Five fun traditions you won't find elsewhere" is recommended reading. for a Canadian who grew up in NE Alberta a dozen hours North from the US border and still planning my first live NCAA game, articles like this one are really great to come across. something so simple like an organized cheer... why don't we see anything like this in junior hockey?
Posted by Guy Flaming @ 1:20 AM