Mucha On The Move

The Portland Winterhawks sit 2nd in the WHL's U.S. division and 3rd in the Western Conference overall, and today traded their number one goaltender Kurtis Mucha to the Kamloops Blazers for a 4th round pick. The Hawks are enjoying a rebirth on and off the ice this year, and Mucha was a big reason why as far as I was told, but this deal allows them the ability to add an overage skater. The Hawks only fly through Edmonton once, and when they did I was impressed. Portland Head Coach/G.M. Mike Johnston must have a ton of faith in 19 year old Ian Curtis, who's appeared in 12 games with a 7-3 record, a 3.33 GAA, and a .905 save percentage. Portland also has 17 year old Mac Carruth out of Minnesota to plug in between the pipes, but one has to wonder if either of them are up to the task of carrying the team into the playoffs.

For Kamloops, Mucha gives them a credible last line of defence, which is clearly needed for a team that's given up 122 goals this year, the most of any WHL team. That they only gave up a 4th round pick for the Sherwood Park pipeman doesn't hurt them at all. 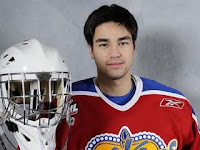 This trade is interesting for a few other teams as well. Will Seattle send 20 year old Prab Rai who has 13 goals and 25 points in 24 games to their U.S. division rivals? Recently Guy thought out loud about the Oil Kings dealing Torrie Jung. It's a thought I've heard from a few other people as well. If the price is a mid round pick, is it worth trading the most important position on your team for a 4th round pick? The Oil Kings might be able to get away with it because they have Cam Lanigan waiting in the wings to take over from Jung. But it will be very interesting to compare the Blazers and Winterhawks the rest of the way.
Posted by Dean Millard @ 5:00 PM