Everyone loves a Cinderella story. It's human nature to cheer for the underdog; Rocky Balboa, Rudy, Hoosiers, The Karate Kid... cinematic examples of the David VS Goliath story that can have the manliest of men leaking like a chick watching Titanic.

Everyone loves a Cinderella story and yet... no one wants to be Cinderella.

NCAA hockey has had its share lately. Air Force wore the glass slipper for much of last year while riding a lengthy undefeated streak. They passed the mantle on to Bemidji State who made it to their first Frozen Four before falling just short of their ultimate goal.

There is no doubt that the feel good story through the first couple of months of the 2009-10 schedule can be found in the hockey hotbed of Connecticut. The Quinnipiac Bobcats, a program that has never had a losing season since during Division I back in 1999-2000, look poised to be headed to the ball this Spring.

The Bobcats have never been ranked in the top 10 in the history of their program but that's something they changed last week when they came in 9th on the USCHO.com poll. But that wasn't enough and so after improving their overall record to 12-1-0 last weekend, Quinnipiac vaulted up the charts and is currently ranked as the 4th best team in the entire NCAA. 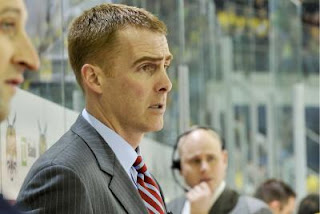 Last night on The Pipeline Show we were pleased to speak with head coach Rand Pecknold who talked about how his team has managed to reach new heights this season.

"A big part of [our success] has been our leadership, our captain is Jean-Marc Beaudoin (picture below) who played for Bonnyville [Pontiacs of the AJHL]. It's the second year in a row that we've had an Alberta kid as our captain."

The coach talked about the fact that the Bobcats lead the NCAA in scoring although he admitted he wasn't exactly sure how they had achieved that feat. Since he mentioned that his captain is Canadian I decided to jokingly ask if having as many Canucks as possible was the secret to NCAA success.

"Absolutely! We're about half and half as we get a lot of kids from British Columbia and Alberta... my Canadians, especially the Western guys, have been our pipeline, our bread and butter over the last ten or eleven years." 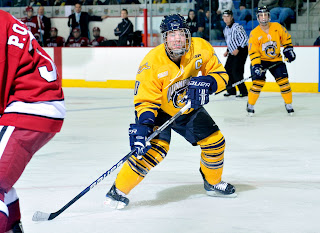 The dual citizen coach talked about the recruiting process for his program and what some of the positives he feels there are for players who choose the Bobcats. Two recruits that will be joining the Bobcats next season come from the BCHL in twins Conor and Kellen Jones. The brothers play for the Vernon Vipers but had success at the recent World Junior A Challenge in Summerside PEI. Coach Pecknold touched briefly on the twins.

"They are outstanding players; great motors, great hockey sense, they just go-go-go and we're really excited to get them. we'll be lucky to keep them for four years. even though they're not the biggest guys they are pretty dynamic and they're special players. with the way the game has changed in the NHL, these days size isn't as big of an issue is it used to be. We're very excited to get them and they sure will make an impact when they get on our campus next fall."

There will be those who suggest that the Bobcats have benefited from a fairly easy schedule. I was in that boat a couple of weeks ago but as I explained to coach Pecknold, their recent success has started to win me over. Recent victories against Colgate, Cornell, Princeton and Massachusetts are proof that no one should take the Bobcats lightly. I asked the coach if he felt they were still having to prove the skeptics wrong.

"I think you always have to do that. we're still kind of the new kid on the block in that this is our 12th year of Division I so we don't have the 50, 60 or 70 yeas of history like a Cornell or Boston University or Michigan. But we've had a lot of success over the last 12 years..."

Dean looked back on the season schedule to date and zeroed in on the one loss the Bobcats have suffered so far, an 8-5 setback against Robert Morris a day after shutting them out 5-0. Dean wondered if the loss might actually have been a blessing in disguise to make sure the team didn't get complacent in their success and the coach agreed.

"I don't think we're taking anybody lightly and we're not getting too big for our britches but certainly we're getting a lot of attention. The #4 ranking is bringing a lot of media..." 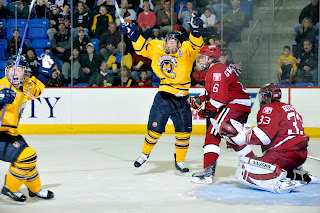 There hasn't been a NHL success story yet that has originated with the Quinnipiac program but according to coach Pecknold, it's just a matter of time.

"we've had guys sign NHL contracts but we just haven't had that guy break through. It's going to happen. We just played on Friday against Princeton and we had 20-plus NHL teams in the stands watching a couple of my seniors."

The coach was referring to a pair of free agent seniors in Erik Lampe and Brandon Wong (above photo) who are having strong offensive seasons again this year. Wong, a B.C. product, leads the team in scoring with 19 points in 13 games and Lampe is right behind him with 18 points.

Quinnipiac has a freshman that hails from our neck of the woods that we had to get the coach to comment on. Reese Rolheiser is a former Sherwood Park Crusader (AJHL) and has 7 points in 12 games so far this year which, according to the coach, has gotten better after a so-so start.

"It was a little bit on an adjustment for him when he got here. To be honest with you, he didn't know how to play defence and struggled a bit with his competitiveness but the skill was there and he's been so coach-able, he's bought in and his improvement has been just amazing in the first two months."

We finished the interview by asking the coach what initially led him to Quinnipiac and what has kept him at the school for almost two decades now. "What led me here was, 16 years ago I need a job!" he joked,

"In terms of keeping me here, it's a great job. I mean, I've got one of the best rinks in college hockey, I've got a five year contract which is always nice in the coaching world t- have job security. we live in a nice town, my wife has a good job. I'm not going to say it's the best job in college hockey but it's up there."

We joked after the interview that things are so good in Quinnipiac that the Florida Panthers went out and stole their logo for their recently released third jerseys. Don't you see a pretty big similarity? To me it's a Quinnipiac crest slapped on a Springfield Falcons jersey and presto! (see below). 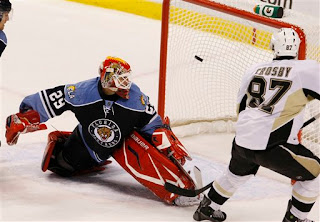 There are still some tough dates ahead this year on their schedule, Yale this upcoming weekend for instance, but the Bobcats are well positioned to finish with the best record the program has ever seen. Can a return to the NCAA tournament be in the cards? I wouldn't bet against Quinnipiac and I'm not going to call them Cinderella either.

Our thanks to Ken Sweeten for setting up the interview and to QuinnipiacBobcats.com for the photos of their team in action. You can listen to the entire conversation and get the rest of coach Pecknold's comments by clicking HERE!

This is good to see. My sister is a freshman on the Bobcats girls team. I got to go down there and get a tour of the whole place. The rink is beautiful and the dressing rooms would rival the best that the WHL has to offer. And the landscape in that part of the country is wonderful.