As promised, today is the day that I release my roster of European and American players that make up the International roster that I would prefer play in the Subway Super Series. If you're wondering why I'm proposing this, then I assume you missed yesterday's opening argument which you can find HERE.

I'll be honest and say up front that I had a pretty tough time making up the team from the Q. In my opinion, it's a particularly down year for imports in the QMJHL especially on the blueline and between the pipes. There is no Timo Pielmeier available in net, no Dmitri Kulikov for the defence. There is a pretty interesting crop of forwards though.

Would my team be good enough to beat the Canadian QMJHL side of the Subway Super Series? I highly doubt it, but that's not the point. The point is that my team would beat the selection of Russians who are actually going to play the games. My international team is better than the Russians and therefore, they'd be the better opponent for Canada's Q-league boys.

Maybe you will disagree and if so, please tell me why in the comments section below. One more piece of business to get to before the unveiling; my thanks to Kevin Forbes of Hockey's Future and Future Considerations for his input in helping me fill out the depth of the line up.

My two picks in net are Chris Holden of Cape Breton and Chicoutimi's Christopher Gibson. Holden is the back up to Olivier Roy with the Eagles and this year has a 5-2-1 record with a 2.74 GAA and .893 save percentage. The 19-year-old from new Hampshire is undrafted and playing in his second season in the QMJHL. Gibson is a Finnish born netminder that is splitting time for the Sagueneens this season as a rookie. The 16-year-old has a 5-4-1 record and 3.09 GAA but a .900 save percentage while playing for the sub-.500 club. Gibson is the one pictured while he played with the Notre Dame Hounds in Wilcox, SK.

Admittedly, neither are stud netminders like the Canadian guys they will face and probably are not on par with Russian Igor Bobkov who is accompanying the Russians. However, they are the best of a short list of imports who are wearing the pillows in the Q this season.

Rookie Adam Janosik makes the team as his 14 points with Gatineau this year is second best amongst first year defencemen. The 17-year-old from Slovakia has helped the purple and orange to s pretty decent start to year. 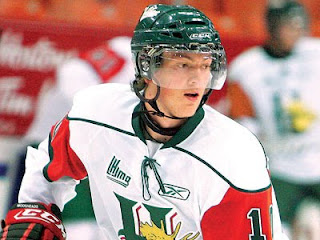 Also on the list is Konrad Abeltshauser from the last place Halifax Mooseheads. The 6'3, 200 lb German rearguard has 10 points so far this year, his first in North America. Abeltshauser turned 17 in September.

[*Edit] Dillon Donnelly is a 16-year-old American from New York who is plying his trade with the Moncton Wildcats. He would have been on my roster but Forbsey tells me that he's playing for Quebec at the U17 so I'm going to make a late edit to my roster....

You'll notice in the comments section that Brock Otten, my OHL input giver, asked about PEI rookie Adam Polasek. He's off to a strong start with the Rocket and deserves a spot on this squad in the first place and so gets the nod as Donnelly's replacement. Polasek stands 6'2 and is nearly 190 lbs so the nearly 18-year-old will have eyes on him this winter for the 2010 draft.

One guy who was on my suggested team last year that makes it again this time around is David Stitch, now with the Montreal Juniors. The veteran of the group, Stitch is playing in his fourth season in the Q but in new surroundings since being dealt from Saint John. Stitch played 4 games in the AHL last spring with the Hartford Wolfpack.

Lauri Tokoi makes the team on the recommendation of Mr. Forbes. I admittedly know nothing of the Finn aside from his age (18) and his point total (2). Then again, if Mr. forbes suggests he's on of the top 6 Euro or American blueliners in the Q... that's good enough for me. 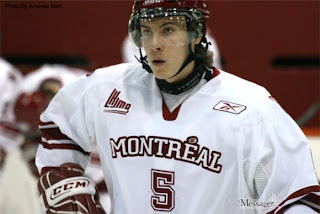 Rounding out my starting 6 is Russian Dmitri Kostromitin. The 6'5, 19-year-old has 16 points this year with Rouyn-Noranda which is 11th best in the league. We saw him first hand during Oilers rookie camp in September and the big man didn't disappoint. He didn't really stand apart from the crowd either but the fact that he didn't look out of place was a positive for him. He's seen above in his Montreal garb from last season.

The two blueliners getting voted in as replacements are Dominik Schlumpf of Shawinigan and Riku Dufva from Lewiston. Schlumpf is a 18-year-old Swiss product in his second Q season and has 10 points under his belt this year. Dufva hails from Finland and is 20 games into his debut campaign in North America.

Ryan Bourque makes the grade as a point-per-game forward in his first Q season. The son of the Hall of Fame Bruins defenceman is playing for another Hall of Famer in Patrick Roy with the Remparts. 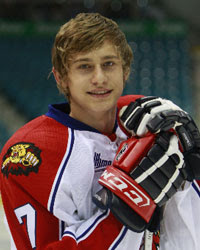 Russian Kirill Kabanov and Stanislav Galiev are obvious selections to the team. Both are potential top-10 NHL picks in 2010 and are big contributors to the Wildcats and Sea Dogs respectively. I know that Kabanov is out with a new injury but for the sake of this exercise... he's on the list.

Drummondville is one of the top teams in the again this season and Czech rookie Ondraj Palat is part of the reason why. He has 18 points so far but the 18-year-old forward is still getting used to the league.

Rimouski Oceanic forward Petr Straka is scoring at a point-per-game pace and has 13 goals in 23 games. At 6'1 and 180 lbs, Straka has decent size and the 17-year-old is eligible in June of 2010.

Baie-Comeau pivot Simon Olsson is having a solid season. He played two seasons in the USHL before coming north to the Q and now the 20-year-old swede is having a career year with 27 points in 20 games. He's a tiny 5'6 so an event like this might be the highlight of his junior career.

Back to Gatineau in order to add 17-year-old rookie center Denis Kindl. The first year Czech native is 4th on his team in scoring with 17 points.

I'm a bit surprised but the last place Halifax Mooseheads have another player on my roster in Tomas Knotek. The 19-year-old is in his 3rd Q-league campaign, all with Halifax, and is on pace to set new career highs. He had 66 points as a rookie but has 21 already this year. 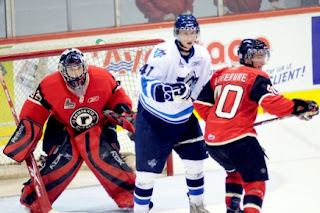 Jakub Culek is a big 6'4 center pictured above. Originally from the Czech Republic, he's lighting it up this year for the Oceanic. Culek's 25 points are third best on the squad and he just turned 17 in September. He's barely a week old enough for the 2010 draft which will make him a player of interest this June.

The last center on my list is Tomas Kubalik from Victoriaville. The Tigres middleman has racked up 30 points in 21 games as a 19-year-old rookie and at 6'2 and 189 lbs, has the size that gets him drafted. He was, by Columbus in the 5th round of 2008. 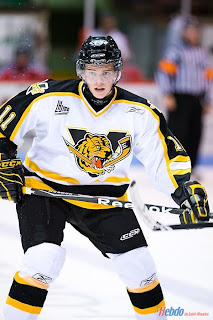 Andrej Nestrasil (DET, 2009) has 28 points for Victoriaville giving the Tigres a 1-2 import punch with Kubalik. The 18-year-old is reportedly playing inspired hockey this year and is on pace to shatter his 57 point mark from his rookie year in the league.

Another addition from the Quebec Remparts is also a player who appears on the Russian list as well; Dmitri Kugryshev. The winger was a 2nd round pick by Washington back in 2008 and is having a point-per-game season with Quebec which is off his pace from last season.

German Toni Ritter is now with Shawinigan after being dealt from Montreal earlier this year. I actually thought Ritter would get drafted late last June but he went unselected and remains on the market. Ritter turns 20 later this winter.

Last but certainly not least is Mikhail Stefanovich. The third Quebec Rempart on my team is also one of the most talented as the Toronto Maple Leafs decided when they picked him in the 3rd round last June. The Belorussian has 10 points in 9 games after a late start to the season.

Was any consideration given to P.E.I. Rockets defenseman Adam Polasek?

He was excellent at last year's Under 18's, is currently 3rd in rookie defenseman scoring (3 goals, 10 assists) and has been, from what I've heard, the Rockets best defenseman so far this season.

Yes, he was on the very short list of available defencemen... but was rejected by my Q-insider.

Cool. Good to know Guy. Don't really get to see much of the Q. Just see a guy with some fairly flashy stats.

Bit of miscommunication between Guy and I about Polasek. We were talking about defensemen and both Tokoi and Polasek were brought up (both of them being import defensemen playing for PEI). Anyway, at some point, mention was made that "the PEI guy" should be on the team and some wires must have been crossed about which one it should be.

LOL. Awesome stuff guys. Glad I could be of service for the QMJHL portion! ;)

I hope Lauri Tokoi read the original article and got himself all excited for the nomination. Looks like he could use the increased confidence!

All kidding aside. Great article by the way guys (Guy, Kevin). Love reading stuff like this, especially for the QMJHL where my knowledge really only extends as far as I can read.

Adam Jánošík IS and always was SLOVAKIAN not Czech,he even played for SVK in the last U18 WHC for God´s sake!!

Thanks "Anonymous"... someone should tell the QMJHL then:

I like your overall idea but was thinking a cool event--even if it means losing imports for 6 games rather than 2--is to have the best imports in the whole CHL play each of the three Canadian rep teams.

Or, if you're looking for a big event, as in your subsequent post, why not have this all CHL import team play a tune up game or two against the Canadian team, or Red White Teams, prior to the WJC, or at the final camp in December.

Anyway, I think you're on to something.

Guy Flaming:
You´re welcome. Well, what can I say? It´s just so typical that every Slovak player who has ever stopped onto Czech soil automatically is recognized as Czech. North American media, fans etc. seem to be hopeless cases in this:D

Not sure if anyone will read this, but Lauri Tokoi has opted to return to Finland for the remainder of the season.