Tuesday morning started like most other days in Springfield for Ryan O'Marra, but ended unlike any other in his life.

It was the team's first practice of the week and so it was an up tempo skate, and for the Oilers prospect it was followed by a meeting with Falcons Head Coach Rob Daum.

"I actually thought he was going to show me something that happened from last weekends game" O'Marra told TPS Friday. "They told me I was going up and I couldn't be more shocked and excited at the same time."

After racing home to pack and pick up his passport, O'Marra arrived at the airport only to find out he missed his flight, and had to wait almost an hour for another flight out, all the while thinking he might have missed his first shot at an NHL game.

"I was freaking out," chuckled O'Marra. "I had a lot of highs and lows during that time span." As it turns out, if O'Marra wouldn't have made it to Ottawa in time, he wouldn't have played an NHL game during his call up as Ales Hemsky returned to the line up Wednesday against Buffalo.

The 2005 first round pick of the New York Islanders landed in Ottawa just after 6:30 PM, left the Ottawa airport at 6:45 and arrived at the rink at exactly 7:18, giving him 12 minutes to dress, thanks to a ride in a police cruiser, "in the front seat."

O'Marra says luckily he doesn't have any pre game rituals, so getting dressed in a hurry was no problem and received some calming advice from his teammates for a night.

"I remember Jason Strudwick just saying ‘here we go, the first of many’ which was really nice of him."

O'Marra's warm up consisted of a couple of quick laps before the singing of O Canada, and nerves set in as soon as the lights came up and he was staring at 18,000 people in the crowd. He had one word to describe his first NHL shift.

He concentrated mainly on getting the puck out of his end, and into the Senators zone, while trying to make contact with anyone in an opposition jersey.

"I can't pin point exactly what shifts I got a hit in and which shifts I didn't" said O'Marra who was credited with 2 during his 7 shifts, "that was a big focus of mine."

Last week on TPS we talked about O'Marra as a possible call up because of his face off ability helping to replace injured centre Shawn Horcoff. O'Marra took one draw Tuesday night and won it handily.

"Unfortunately I won it a little to clean as it went into our zone and unfortunately we didn't get the puck out and they ended up scoring."

His stat sheet read -1 in six minutes of ice time, with zero shots, 2 hits and 1-1 on the dot. All with his father and 2 best friends watching from the crowd of a Canadian city.

"I got a taste of it and now I want more" 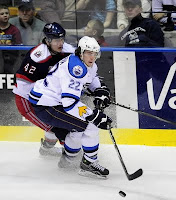 That situation is a far cry from O'Marra's start with the Oilers organization. After being acquired along with Robert Nilsson and a first round pick for Ryan Smyth in 2007, the Tokyo born forward spent a good portion of 2007-2008 in Stockton of the ECHL, and struggled with consistency last season with the Falcons. He’s almost done a 180 this year, flourishing in a checking role with Colin McDonald.

O’Marra says he received positive feed back from Oilers management and while he’d never say it, having them notice his play this year was likely the most rewarding part of the call up. Sometimes a player stuck in the minors has to wonder if the NHL brass even remembers his name after training camp. But a new attitude – thanks to training in Finland this summer - has the 22 year old on the Oilers radar screen and could warrant another call up later in the year.

“That Finland trip gave me a lot of confidence back in my game, something I was definitely lacking going into last season, didn’t have much confidence in myself as a player anymore, I lost it in my first year. Unfortunately I didn’t show enough (in the past) to warrant being given the opportunity I’ve been given this year.”

O’Marra says he was trying to find himself as a player, and coming to the realization that he didn’t have to score 80 points and be a first line player to succeed was huge. Rob Daum wanted O’Marra to become a checking centre, and the 2 time World Junior gold medalist has responded.

“That’s been my main focus, I haven’t been focused much on offence” explained the forward with 4 points and 23 shots of goal this year. “They have told me in recent days to shoot more and drive the puck to the net more and you can do more things in the offensive zone.”

Which could result in a few more points and a brighter future with the big club, after all this is the final year of Ryan O’Marra’s entry level contract.

Bird Bits: Springfield kicks off a 3 game home stand tonight when they host Bridgeport, they will welcome Albany on Sunday. The Falcons are riding a 2 game win streak which included a 5-2 victory over their opponents tonight. Rob Daum’s club has picked up 10 points in their last 8 games.
Posted by Dean Millard @ 11:05 AM

I can only imagine what that day must have been like. Crazy to say the least.

With only seven shifts he certainly wasn't asked to do much but he wasn't a liability out there by any means. Considering all the injuries right now do you think the Oilers will give him another chance if they need a body this weekend.