One on One: Jared Cowen 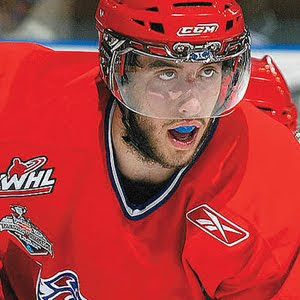 After a a serious knee injury wiped out the second half of his 2008-09 season likely leading to a slight drop at the NHL Draft, Jared Cowen is doing everything he can to prove his real worth.

Spokane was recently in Edmonton to take on the Oil Kings and I had a chance to speak with a few of the players including Cowen, the captain of the Chiefs.

Last year began about as good as he could have hoped for; Cowen was ranked as a top-5 prospect, the top blueliner available from North America and second overall behind only Victor Hedman. He was coming off a Memorial Cup win where, as a 17-year-old, he was one of the best defencemen in the tournament.

The dream season took a hit in December when his name didn't appear on Hockey Canada's invite list for the final World Junior selection camp. In hindsight, you can't really say Hockey Canada made a mistake because they went to Ottawa and captured their 5th straight gold medal. However, Cowen's omission did raise a few eyebrows when the camp list initially came out.

Not being able to partake in the WJC tournament was a negative for a player so highly touted during his draft year. Things went from bad to much worse shortly after the CHL/NHL Top Prospects Game when Cowen sustained a knee injury against the Chilliwack Bruins. Cowen suffered "an MCL sprain and a high grade injury to his ACL" and missed the rest of the regular season, the WHL playoffs and he was limited to near-observer status at the NHL combine.

He was still drafted very early in the NHL event but did not go in the top 5 like most predicted he would earlier in the season. Eventually he fell into the lap of the Ottawa Senators in the 9th position who, according to Tim Murray, were expecting to choose a forward. The draft day results received mixed reviews from Cowen who was pleased with who took him but clearly disappointed that his stock did slide a bit because of the inactivity. 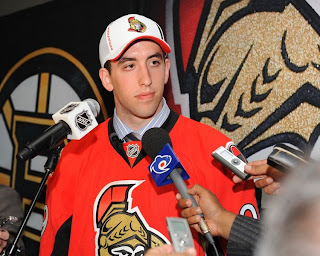 "Even though I was injured it was kind of nice to end up going to a Canadian team," Cowen said, "If I hadn't of been injured I think I probably would have gone (earlier) to somewhere in the States but that's fine. Staying in Canada was probably the best thing that could happen so in hindsight it was kind of a good thing to have [the injury] happen."

Off season training took on a different meaning as it wasn't just about knocking off the summer rust but in rehabilitating the knee and preparing for a NHL camp. When the time came, Cowen admits he still wasn't 100%.

"It was a different than what most guys experience because everyone else there was healthy except for me." he said, "Coming back from the ACL injury was doubly hard for me. Your first NHL practice you're just trying to get your legs going and I only had a leg and a half I guess but it was still lots of fun." 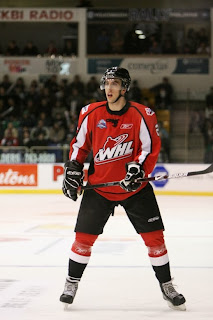 Cowen had 21 points at the time of his injury last season. This year he is adding points at a higher rate and currently has 14 through 20 games. The team underwent a few changes over the summer including the loss of sniper Drayson Bowman and starting netminder Dustin Tokarski. When the captain returned to the club from Ottawa's training camp, the team had changed a bit more by adding former arch-rival Kyle Beach to the fold. I asked Cowen how the former Everett Silvertips forward was fitting into the dressing room.

"It's been good. When I came back he was already with the team, [Spokane] had already made the trade, so it was a pretty short adjustment period," the big defenceman smiled, "He's fit in pretty well. He's one of the boys already so it's good. He's a really good player too so he's helped us out in every area that we expected him to."

As for the goaltending situation with the Chiefs, Cowen says he's not at all worried about whether James Reid is up to the task of replacing Tokarski.

"He's really picked it up over the last few games here and was named the CHL Goaltender of the Week," he said, "[Reid's] been playing good and Kyle has been scoring goals so those holes have been filled pretty well so far."

This year the Chiefs can't afford to have players who aren't performing their best every night. The WHL's U.S. Division might be the tightest from top to bottom in the entire league as there really is no weak sister for the others to beat up on. The Seattle Thunderbirds are in the cellar but can't be taken lightly just because their 22 points puts them there. Spokane is in fourth place, just 5 points up on the T-Birds and within spitting distance of second place Portland.

"I think this year its one of the strongest divisions for sure," Cowen agreed, "Tri-Cities is up there again, Portland is having a good year for the first time in a long while so that's a bit of a change. We've got our work cut out for us here but it's a good challenge to have." 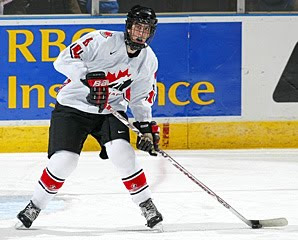 Although his focus is clearly on the business at hand, even Cowen admits that he's looking forward to finally getting his shot at Canada's team roster the World Junior Championship.

"Yeah, I've been waiting for a while now, the last couple years, to get on that squad," he said, "I think the biggest thing for me is to try and get my knee feeling as good as possible so that I'm comfortable. First up is the Subway Super Series and then after that... the waiting game."

Somehow I don't think Cowen is going to have to wait long for Al Murray and Hockey Canada to call.

Great interview, thanks for posting