Each day until September 15th TPS will take a look at one team from the East and another club from the West and spotlight a few rookies to watch for this season. This afternoon we explore the potential rookies for the Washington Capitals. 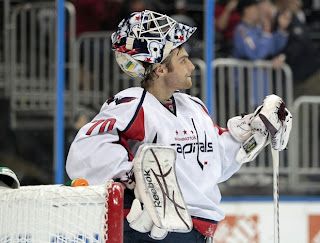 Obviously it's going to be pretty tough to crack a roster which some publications and pundits are making their pre-season favourite to win the 2012 Stanley Cup. Yet there area couple of players who will probably get a look at some point this season and have the ability to stick once that opportunity comes around.

First and foremost, it was an emotional roller coaster of a week for netminder Braden Holtby early in July. One day he sees Semyon Varlamov dealt to the Colorado Avalanche thus opening his door to a full-time NHL spot in 2011-12 and a week later the Capitals ink veteran Tomas Vokoun to a contract effectively slamming that door shut again. We talked to Holtby about that situation and appreciated his candor. We've been high on Holtby since his days in the WHL with the Saskatoon Blades and see this as a temporary setback, he'll get his shot like he did last year when he held a .934 sv% and 1.79 GAA through 14 appearances. 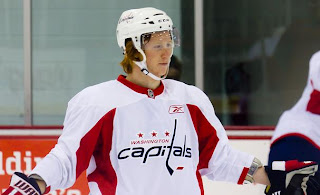 The new kid on the block will be hard to miss. Cody Eakin's play on the ice stands out as much as his naturally bright red/orange head of hair. The tenacious forechecker proved on the international stage for Canada that he can excel when asked to take on a defensive role but throughout his WHL career he's displayed a true gift for racking up points. Concerns in his draft year due to a serious concussion saw him drop to the 3rd round but the Caps grabbing him at 85th overall looks like an absolute steal 3 years later. He was close to making the team last year, it's not a stretch to think he could get even closer this time around.
Posted by Guy Flaming @ 12:01 PM