Each day until September 15th TPS will take a look at one team from the Eastern conference and one club from the West, spotlighting a rookie or two to watch for this season. This afternoon we explore the freshmen candidates of the Buffalo Sabres. 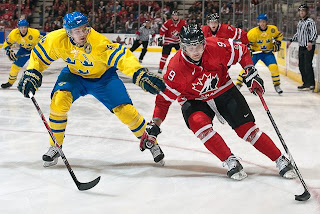 After breaking in WHL players like Tyler Myers and Tyler Ennis the last couple of years it looks like it might be the OHL's turn. Two forwards are reasonable candidates to see NHL duty this year beginning with 2009 1st round pick Zack Kassian. The former Peterborough Pete and Windsor Spitfire, Kassian is a 6'3, 225 lb wrecking machine who can do more than put people through end boards. He finished with 77 points in 56 games last year and has also played for Canada at the WJC, another sign of his value. Discipline has been his biggest adversary, both on and off the ice, but he seems to have grown out of that stage of his life.

Fighting for the same piece of NHL real estate will be Marcus Foligno who has obvious family ties to the organization but the abilities to make it all on his own. Another power forward winger, Foligno also played for Canada and has the ability to contribute offensively as his 59 points in 47 games with Sudbury last year would indicate. I'd suggest that draft position will help Kassian but if there's a way that both of these guys can crack the line up at the same time - they will. 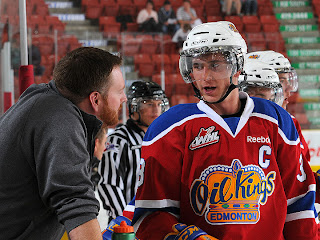 Defencemen Brayden McNabb and Mark Pysyk are going to have to be patient. With the additions of Robyn Regehr and Christian Ehrhoff, things got a lot more crowded on the blueline. 20-year-old McNabb could return to the WHL but I'm sure he'll end up in the AHL with a potential recall down the line. Pysyk (above) will return to captain the Edmonton Oil Kings with what is their strongest team of their 5-year existence. He also stands a pretty good shot at playing for Canada at the 2012 WJC in Edmonton/Calgary.

Let's not forget Luke Adam. The former QMJHL standout got his first taste of the NHL last year, 19 games in total, but they weren't nearly as impressive as his 29 goals and 62 points in the AHL. He's not as big as either Kassian or Foligno but he's slightly older and more experienced. The Sabres have been known to exude patience with their prospects with Ennis and Myers being exceptions to that rule. 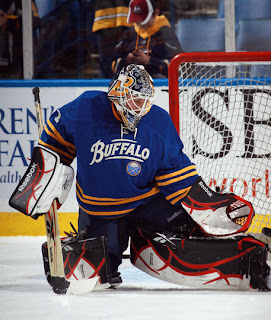 Lastly, it would appear that Jhonas Enroth's time has finally come. The Swedish netminder has spent almost all of the last three seasons on the farm in Portland biding his time but broke through last year with a 14-game stint that saw him carry a 2,73 GAA and .907 SV% with a shiny 9-2-2 record. The 5'10 goalie has his work cut out for him at the NHL level but playing behind Ryan Miller should give him plenty of time to get acclimated.
Posted by Guy Flaming @ 1:30 PM