The Ex-Jets have went through a major shift in philosophy since 2008 when they rushed Kyle Turris, Mikkel Boedker and Viktor Tikhinov to the big leagues only to watch all 3 struggle for the next few seasons. Since a new regime took over in the desert, the dogs have let their rookies cultivate in the minors or Europe.

Oliver Ekman-Larsson did play almost 50 games last year (2 years after getting drafted) but he also spent time in San Antonio of the AHL, and most don't expect 2010 first rounder Brandon Gormley to slide onto their blueline this year. 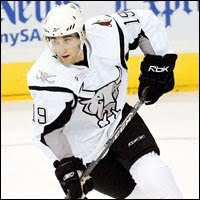 However up front there are a few candidates and the one with the best chance in my opinion is sharp shooter Brett MacLean. The biggest knock on MacLeans' game is his footspeed and that he's not playing with John Tavares anymore. In his final 2 OHL seasons with Tavares and the Oshawa Generals MacLean put up 108 goals. In 3 years of pro he's lit the lamp 75 times. But those in the Coyotes organization like what MacLean has showed them, working on becoming a more complete player and he could be in line for a full time spot this year. With some power play time he could be a nice surprise for the club.

A dark horse candidate could be pint size forward Andy Miele. Yes he's only 5.08 but the Miami RedHawk put up 71 points in 39 games during his senior season last year when he won the Hobey Baker award as the nations top collegiate player.
Posted by Dean Millard @ 6:00 AM