Last year Cam Fowler fell into the perfect situation...literally. After getting passed over by 11 teams in the first round, Anaheim snapped him up and he surprised many by making the team. Fowler was very good at times and very much a rookie on other occasions but his first year was a success. The Ducks also used freshman Brandon McMillan in 60 games after a 4 year WHL career with the Kelowna Rockets. 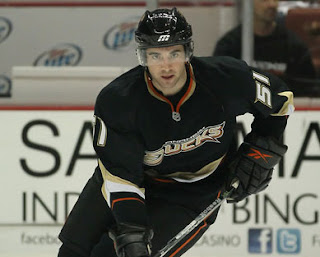 This year there are several candidates to follow in Fowler and McMillan's skate strides as impact rookies. Kyle Palmieri (above) had a nice pro season in Syracuse last year with 29 goals in 61 games. The former Notre Dame Fighting Irish is lightning quick with an accurate shot and did get in 10 games with the Ducks last year. He'll battle Peter Holland for a spot down the middle in training camp. Holland only has 3 games of AHL experience but he's coming off a 37 goal campaign in the OHL. Holland got better in each of his 4 junior seasons and has the solid all around game that could land him a roster spot this year.

If Sami Vatanen lands in North America he might have a shot on the blueline as an offensive injection, while Nicolas Deschamps could move from the AHL to the NHL with a strong start to the season.
Posted by Dean Millard @ 6:00 AM

The guy to watch here might actually be Devante Smith-Pelley. His game lends itself to a third/fourth line role as well. He's drawn some buzz for perhaps being ready to step into the big league.

Also if Selanne does retire, Emerson Etem might find himself fast-forwarded to auditioning for that spot in the lineup.

Deschamps still needs some work and the blue line equation is a crowded situation already without factoring in Vatanen.

Finally, Palmeiri has played mainly on the wing since turning pro and that's likely where his future will be as well.