Loubardias back in the rink 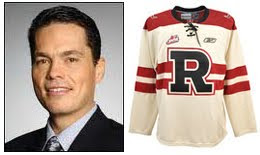 I'm a fan of Peter Loubardias. The person and the play by play man. That's why I was sad to hear that he wouldn't be returning to the broadcast booth as voice of the Calgary Flames on Rogers Sportsnet this year. However, that is management's right to make changes where they see fit.

Shortly after Peter was relieved of his duties I had a conversation with a head scout in the NHL and mentioned his name as a possible scout...


I guess I knew what I was talking about as Loubardias has joined the Red Deer Rebels organization as a scout. He was seen this weekend at an Alberta rink, and it was confirmed to TPS by the club tonight.

I think he'll do a fantastic job as a bird dog, and maybe as an NHL scout one day. I don't know anyone who loves being in the rink more than Peter and he has the 'must have' quality that makes a good scout...the ability to listen.

Every time he's joined our show he's provided us with a wealth of information about any player we've asked him about. He's even nailed two predictions regarding past World Junior Championships. Matt Halischuk scoring a big goal for Canada. And Cody Hodgson leading the team in scoring. Both came true.

Best of luck Peter and see you at the rink soon.
Posted by Dean Millard @ 10:02 PM