I don't know that the Blueshirts have another Derek Stepan debut performance awaiting them this year but you never know, you could argue that Stepan exceeded expectations last year too. Some of their other brilliant youngsters exceeded the "rookie" status last season; 2011-12 sophomores like Ryan McDonagh, Mats Zuccarello come to mind. 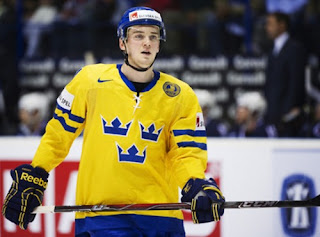 Recently acquired Swedish blueliner Tim Erixon is certainly in the mix to make his NHL debut. The former 1st round pick of the Calgary Flames failed to come to terms with that club and was subsequently dealt to the Rangers. With above average size and a complete game, Erixon has all the tools to have success in the NHL including pro experience having played in the SEL for the past three years. In New York he could slide right onto the roster out of camp but he won't be the only guy looking to crack the roster on the back end.

Pavel Valentenko was close to making the team last Fall but ended up playing the entire season in Hartford/Connecticut. The Russian was a 5th round pick of Montréal's back in 2006. Listed at 6'2 and 225 lbs, Valentenko managed 17 points last season on the farm.

Former Medicine Hat Tiger Tomas Kundratek may have a chance as well. The Czech product played in the AHL as well last year and didn't have the offensive numbers that he managed during his last whirl in the WHL. 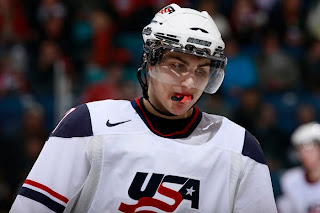 Lastly, the professional rookie that might garner some media attention early on is Ryan Bourque, son of legendary NHL blueliner Ray Bourque. Ryan isn't big at just 5'9 and 170 lbs but he's aggressive on the attack and uses his speed to full advantage. Back to back years in the QMJHL with Patrick Roy's Quebec Remparts saw him finish with 43 and 59 points respectively which doesn't sound like much until you notice that he never played 50 regular season games in either year. He's also looked good in the past when he's worn Red, White and Blue (above).

Sorry my friend but the Ranger rookie to watch is 2007 6th round pick Carl Hagelin.

Hagelin after joining the CT Whale from Michigan showed that he adjusted quickly to the AHL speed.

Off all the Ranger prospects, he should the one who will have the biggest impact in 2011-2013

Could be, was going to give him a mention as I did with Bourque.

I'm not completely sold on Hagelin to be honest, very slight. Small sample size but he didn't do much for me at the Frozen Four. A couple of moments there but his team was outplayed for most of both games.

Maybe a call up at some point because of injuries?

You really think he makes the team out of camp or were you thinking he makes an appearance at some point in the year?