The Hawks had a few rookies on the roster last year with Corey Crawford providing the biggest impact in goal. Jake Dowell played almost a full season while blueliner Nick Leddy skated in 48 games. This year there won't be quite the rookie impact but a few guys will try and barge their way through. 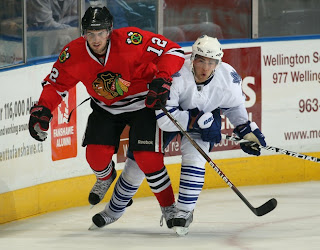 Kyle Beach has the size, talent and toughness to make it in the NHL, but hasn't put the whole package together yet. Beach has had trouble shaking the reputation as undisciplined off the ice and needs to prove his detractors wrong soon. 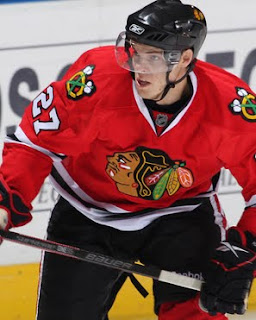 Ben Smith was very good late in the season and in the post season for Chicago and will get a real long look at training camp.

Jeremy Morin (left) also impressed during a 9 game stint last year after being picked up in the Dustin Byfuglien deal with Atlanta. Morin who led team USA to a gold medal in 2010 has a terrific blend of grit and skill that will someday make him a top 6 guy with the Hawks and he could see some time in that role this year when injuries strike like they do to every NHL club.
Posted by Dean Millard @ 6:00 AM