The biggest rookie impact in Dallas this year will be behind the bench as Glen Gulutzan gets his chance after winning 87 games in two AHL seasons for the Stars affiliate in Texas. That could be a good thing for his former players in the minors as he might be willing to give them a shot. 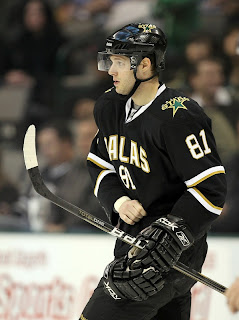 Philip Larsson could be in for a promotion after a solid season in the AHL. Larsson is poised and put up 21 points as a rookie and in his first full year in North America. He seems to be a quick study after playing with men in Sweden at the age of 16. His hockey IQ is off the charts and with Sheldon Souray on the blueline in Dallas there is bound to be a need for an injury replacement at some point this year.

Tomas Vincour (pictured) is a decent bet to spend some time with the Stars in Dallas this year as well. The Czech forward who played a few years in Edmonton for the Oil Kings has evolved his game from a scorer to more of a well-rounded forward. He's big and not afraid of physical play, can display an offensive side but excels as a strong two way forward with shut down ability.
Posted by Dean Millard @ 6:00 AM