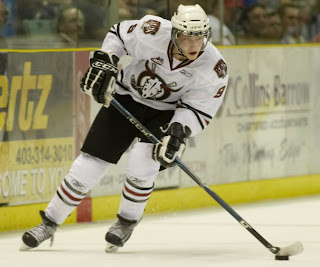 Last year it was all about the rookies as Taylor Hall, Magnus Paajarvi, Jordan Eberle, Linus Omark and Jeff Petry among others all made an impact with the Oilers. This year there won't be that many fresh faces in the dressing room but there will be a few. I wouldn't keep Ryan Nugent-Hopkins if I was the team brass, but he might force his way onto this roster. He's the obvious choice for a centerman, but there are some others who don't get as much ink. The 4th line middle man spot is wide open heading into training camp - if RNH doesn't make the team.

Last year Ryan O'marra had a look as did Chris VandeVelde. The latter is still considered a rookie this season, but my money is on Anton Lander grabbing that spot at some point in the season, if it's up for grabs... and the way Oilers get hurt it should be at some point. 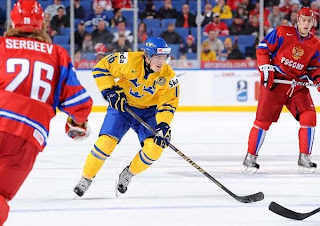 The Oilers drafted Lander in the 2nd round of 2009 and ever since he's been brewing in the Swedish Elite League. He's as smart as they come on the ice, works extremely hard and oozes character. He also has underrated offensive skills for a guy pegged as a defensive forward. Lander could end up like his countryman Linus Omark last season, start the season in the AHL but earn a spot for good as the year goes on.
Posted by Dean Millard @ 6:00 AM