Each Day until September 15th TPS will take a look at one team from the East and one team from the West and spotlight a few rookies to watch for this season. This afternoon we explore the possibilities for the Montréal Canadiens.


With David Desharnais, Ryan White and Lars Eller all breaking the rookie limit last season it might be tough for the Habs to add another newcomer this year. If there is an opening for a rookie it's probably on the back end after the departures of Roman Hamrlik and James Wisniewski. 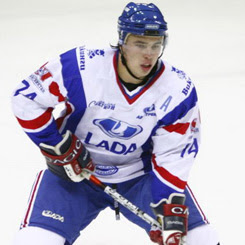 Russian rearguard Alexiei Yemelin was taken in the draft way back in 2004 but after 7 years of playing in his homeland, it would seem like Montréal's patience could pay off this year. Listed at 6'2 and 223 lbs., Yemelin broke out offensively last season in the KHL compiling 26 points with Kazan. Up to that point there was no indication that he had an offensive dimension but the 3rd rounder surprised last year.

Yannick Weber played half the year in the NHL and will look to build on those 41 games. Another Swiss defender named Rafael Diaz will seek to crack the roster too. The free agent signee has recorded 31 nad 39 points over the last two years in the Swiss League. He's averaged size but has been described as an all around, good skating defender. Diaz might be earmarked for Hamilton though. 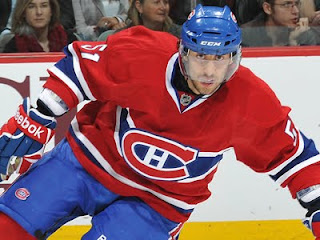 Up front Aaron Palushaj (above) should be the next in line for a promotion after leading the Bulldogs in scoring last season in scoring. The former Michigan Wolverine was a 2nd round pick by the St. Louis Blues in 2007 but has only managed to appear in 3 NHL games since then.

Lastly, 2009 1st round pick Louis Leblanc is eligible to play pro this year but there is some thought out there that he could be returned to the QMJHL after missing a chunk of development time last year with a shoulder injury. I would be a little surprised if that happened but it is interesting that the 2012 Memorial Cup host Shawinigan Cataractes traded for Leblanc's CHL rights last month.