Former Lethbridge Hurricanes star Zach Boychuk has appeared in 53 NHL games, mostly spread over the last 2 seasons, and will look to finally take up permanent residence in Raleigh. 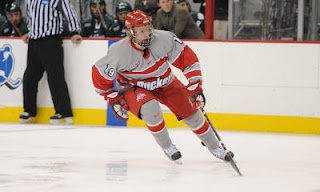 Bypassing Boychuk on the depth chart appears to be 2008 2nd round pick Zac Dalpe. The one time Penticton Vees forward spent a couple of years with the Ohio State Buckeyes before his stellar pro debut last year. On the farm Dalpe collected 57 points in 61 games and he also got into 15 games with the big club picking up 4 points. The middleman could slot in behind Eric Staal and Brandon Sutter on the depth chart. 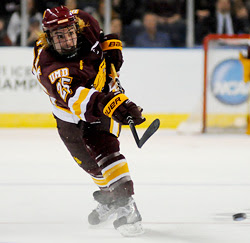 The blueliner to watch for is Justin Faulk who helped Minnesota-Duluth capture their first ever Frozen Four title last April. Faulk was a 2nd round pick in 2010 and had a fantastic NCAA campaign as a freshman contributing 33 points in 39 games and being a huge part of a potent Bulldogs power play.

Most expect that Riley Nash needs more seasoning in the minors before he's ready for the big time but the former Edmonton 1st round pick has potential and may factor in as an injury recall if he's performing well in Charlotte.
Posted by Guy Flaming @ 12:01 PM