CBJ failed to get the most out of a couple of prospects and shipped them off this summer in two separate deals. Nikita Filatov to Ottawa for a 3rd round pick and Jakub Voracek to Philadelphia in the Jeff Carter package. Derrick Brassard is still with the organization but has yet to regain the form he had 25 points in 31 games and was injured in a fight. 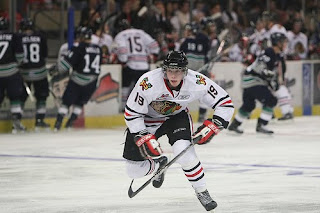 The most watched prospect in Blue Jackets camp will be Ryan Johansen, a lanky forward who's went from barely playing in the BCHL to a 4th overall pick in just 4 years. Portland would love for him to return for a 3rd WHL season as they are likely going to lose Nino Niederreiter, but the Jackets might want him around even if he doesn't play a lot but learns from Jeff Carter. 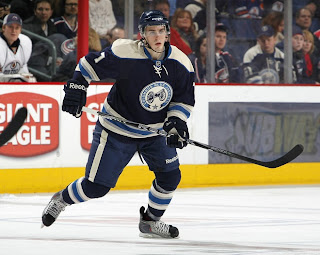 On the back end watch for smooth skating John Moore (above) to make the jump. One scout used to tell us that people would pay to see him skate laps that's how great of a stride the former Kitchener Ranger has. He's not the biggest or toughest guy and that could hold him back, but he plays smart and starts the play well. David Savard and Cody Goloubef are also candidates on the back end.
Posted by Dean Millard @ 6:00 AM