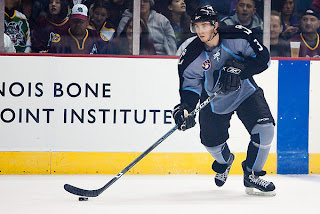 Jonathan Blum is a terrific young player. He's smart as they come on the ice, can skate the puck up ice if he wants to, but usually makes the smart pass to start the play and can run a power play with precision dishing out of the puck.

There will be a lot of fans hoping Ryan Ellis can make the jump to the NHL next season. Ellis has been hyped for years by the national media in Canada for his excellent offensive instincts. His skating has been questioned and his size is an issue, but he does win a lot, and does terrific things with the puck in the offensive zone. He is just coming out of junior though and the Preds may want to let him develop for a year in the AHL.
Posted by Dean Millard @ 6:00 AM