Each day until September 15th TPS will take a look at one team from the Eastern conference and one club from the West, spotlighting a rookie or two to watch for this season. This afternoon we explore the freshmen candidates of the Pittsburgh Penguins.


It's quite possible that the Penguins won't have a rookie on board when they begin the season, they've added new faces to the team over the summer but not players who are new to the league. The questionable future of Sidney Crosby will, in the short term at least, mean another vacancy for the forwards but surely no one from the farm is suddenly going to vault up the depth chart to fill that massive void. 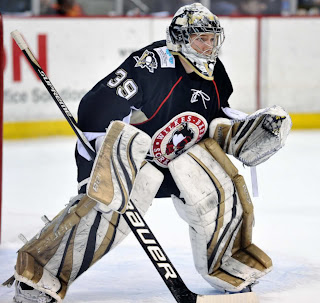 A rookie contribution is more likely to come in a depth role. Third strong goaltender Brad Thiessen is coming off of a very strong year in Wilkes-Barre and the Pens should have the confidence in him to call him up in case the need arises to fill in for either Marc-Andre Fleury or Brent Johnson. The former Northeastern standout posted a 1.94 GAA and .922 SV% with a 35-8-1 record in the AHL last year. 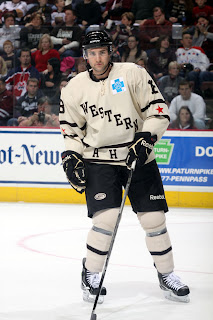 A potential surprise in the tradition of Mark Letestu could be Colin McDonald. A former 2nd round pick of the Edmonton Oilers, McDonald played four full years at Providence before spending the last four in Edmonton's minor pro system. Last year in Oklahoma City he exploded offensively finishing the year with a league-high 42 goals. For his efforts, McDonald was named to the AHL All-Star game but being on an AHL contract, never saw NHL action at all for the last place club. He's a consummate team player, can play any role and could surprise with an opportunity in Pittsburgh.
Posted by Guy Flaming @ 12:01 PM

I have been thinking the same thing about McDonald. Give him a playmaking C; I believe the Penguins have one or two, and he could really make some waves. I may even pick him as a very late round sleeper in a keeper pool.

I hope it works out for him.