Probably my (Guy's) personal favourite logo update from a few years ago, including the Statue of Liberty was a great idea that made it more representative of the city. The shield outline is still present tying it back to the classic logo so traditionalists didn't seem to have much of a problem with the new look either. Probably the most successful re-imagining of the Original Six crests. 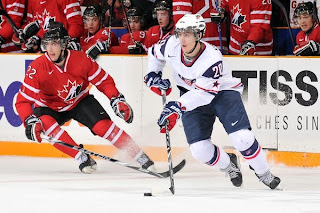 1st pick last year: Chris Kreider (19th overall) - The blueshirts couldn’t have asked for a better year from their ’09 first round pick. Kreider was lights out at the World Junior Championship, scoring 6 goals in 7 games as the U.S. won gold. He then helped Boston College win a NCAA title and then played in the World Championships to close out the year. The Rangers might have hit one out of the park with this kid; he has size, speed, skill and loads of character. Once he gets more physical he will be the total package. (Photo: Matt Manor IIHF Images)

The Good: Marc Staal (12th overall, 2005) - At just 23 years old Staal is turning out to be a great shut down defenceman, and was even invited to Canada’s Olympic orientation camp last summer. He was plus 11 with New York this year while putting up 27 points. He’ll never be a big point producer, but only twice since 2003 has he ended up on the wrong side of the plus/minus chart.

The Bad: Bobby Sanguinetti (21st overall, 2006) - It pains me to write this name down here, as I’ve been holding onto the American blueliner for a few years in my keeper league. But 5 NHL games isn’t enough from the rear guard who scored 29 goals in his final OHL season with Brampton. Sanguinetti might have been a top prospect at one point, but was bypassed by Michael Del Zotto and Matt Gilroy this year.

The Unknown: Ryan McDonagh (12th overall, 2007 MTL) - Somehow the Rangers were able to convince Montreal to give them Ryan McDonagh as well as take on the contract of Scott Gomez last summer. McDonagh is a solid prospect who spent 3 years at Wisconsin, which has become known as a blueline factory. The problem is Mcdonagh sounds like he’s going back for his senior season, which could make him a free agent next summer. 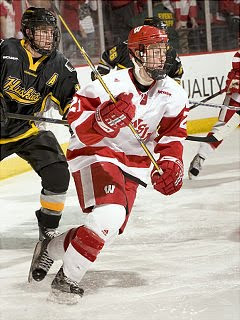 Coming Down the Pipe: Evgeny Grachev was a scoring beast in the OHL and now that he has a year of pro under his belt might be ready to challenge for spot with the big club. Dale Weise took his game up a notch this year with 28 goals and 114 pim with Hartford of the AHL, pretty good numbers for the 4th round pick in 2008 who stands 6.02 and weights in at 206. Chad Johnson, whom Pittsburgh originally drafted, won 24 games while posting a 2.24 GAA and 3 shut outs for the WolfPack. He also saw time with Canada at the World Championship, mostly due to Mark Messier's familiarity, and the fact that a lot of Canadian goaltenders said no to team Canada. Ethan Werek, Chris Bourque and newly signed Derek Stepan, (photo: Derek Anderson NY Daily News) who was terrific at the WJC, are also solid prospects on the way.

Draft Trends: New York hasn’t taken a player from the QMJHL or WHL in the first round since Dan Blackburn in 2001. They have used first round picks on defenceman in 3 of the past 5 years.

Dean Millard: Derek Forbort (NTDP) - At almost 6'5 Forbort has a great wing span that he uses to defend and he's a smooth skater. A good passer who can QB a pp. He does need to bulk up a bit, but the giant weight room at North Dakota where he'll play next year will take care of that. Forbort can play well at both ends of the ice. After not taking a D-man till the 6th round last year the Rangers find a future partner for Michael Del Zotto. 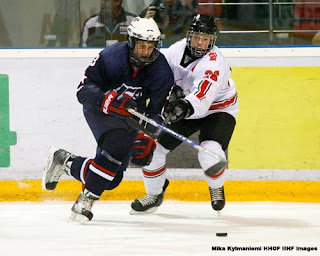 Guy Flaming: Mikael Granlund (HIFK Helsinki) - Touted as one of the smartest and craftiest players available in 2010, Granlund's diminutive size (5'10, 180 lbs) is his main drawback. He wasn't Finland's best player at the 2009 World Juniors in Saskatoon and he finished behind Teemu Pulkkinen in scoring at the U18s but scouts still rave about Granlund's potential. At this point in the draft he might safely be considered the 'best player available'.
Posted by Dean Millard @ 6:00 AM

NY Post - Sather is continuing to make an effort to sign Stepan's Wisconsin teammate, senior defenseman Ryan McDonagh, who also will be at the Rangers' prospect camp.