Back in the days of Adam Oates and Joe Juneau, The Capitals revamped their look with the swooping eagle on their main sweaters. They were a hit early on and I was a little surprised that the team moved away from them as quickly as they did. I always liked the black 3rd jersey they had at the time featuring the logo on the right. I can imagine that they must have looked pretty dark on TV though.


1st pick last year: Marcus Johansson (Farjestads BK Karlstad, SEL) The 24th overall pick last year captained Sweden at the World Junior Championship where he netted 6 points in 5 games. This year, his second in the Swedish Elite League, Johansson scored 10 goals and added 10 helpers in 42 games. A good skater who’s a little on the small side, Johansson was just signed by the Capitals to an entry level deal on May 17th. 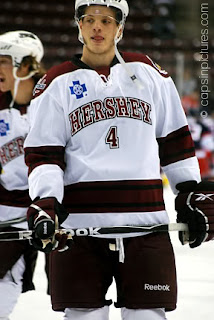 The Good: John Carlson (27th overall, 2008) While Nicklas Backstrom is the Capitals best pick in the last 5 years, he was taken 4th overall and expected to be an all star. Washington’s best bang for your buck pick is defenceman John Carlson. He’s big, skates well and has a cannon of a shot, and they snagged him 27th in round of 2008, after already having a first round pick. I could never figure out why Carlson wasn’t rated higher during his draft year, and he’s starting to justify my questions back then. He scored the game winner for Team USA at the World Juniors and for my money was the tournament’s best blueliner. This year he played 22 games with Washington while suiting up 48 times for Hershey of the AHL. He then played 7 games in the post season for the Caps and is now back in Hershey trying to help the Bears defend their Calder Cup title. It seems like Carlson has passed Karl Alzner on the depth chart. (Photo: Capsinpictures.com)

The Bad: Sasha Pokulok (14th overall, 2005) Every team has one, a first round bust in the top 15. Pokulok is 6'5, 230 lbs but never gelled with the Capitals and they didn’t qualify him last year. This season he played for 3 different teams in 2 leagues and ended up with Bakersfield of the ECHL.

The Unknown: Karl Alzner (5th overall, 2007) What makes Alzner an unknown is nobody seems to know what the Capitals will do with him. Do you wait patiently for him to develop knowing he has top pairing potential? I would. But Washington has watched John Carlson pass him by on the depth chart and might want to use the former Calgary Hitmen as trade bait. Alzner has played 51 games in the NHL, only Thomas Hickey (who hasn’t played one) has played less NHL games out of the top 7 picks from the 2007 draft. 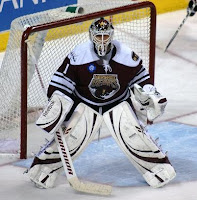 Coming Down the Pipe: Washington has loads of options between the pipes when it comes to their prospects. Semyon Varlamov almost has as many NHL playoff games (19) as he does regular season games (32) and should be a main stay in Washington next year. That leaves Michael Neuvirth, taken 11 picks after Varlamov in 2006 along with 2008 4th rounder Braden Holtby to fight it out for playing time in the AHL. So far it hasn’t been much of a battle as Neuvirth, who led the Hershey Bears to a league title last year has played the bulk of the games in the playoffs. Both goalies put up great regular season numbers.

Draft Trends: Washington’s last 2 first round picks have both been Swedes, and the Caps appear to be fond of Junior A/Tier II leagues. Between Canadian Junior A loops, the EJHL and the USHL, Washington has drafted 10 players in the last 5 years.
They also aren’t afraid to take Russians, having used 2nd round picks in the last 2 drafts on Dmitri Orlov and Dmitri Kugryshev. 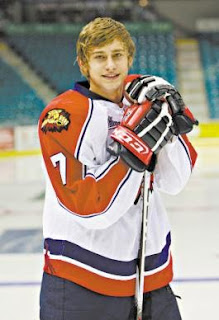 Dean Millard: Kirill Kabanov (Moncton, QMJHL) - So many question marks surround Kabanov, but the biggest one is where he will play next year? He left Moncton during the playoffs to join Russia’s U18 team but was then kicked of that squad. There is no question he has talent and size, but his character has taken a major hit. Still Washington will take a chance, as what Russian wouldn’t want to play alongside Alexander Ovechkin.

Guy Flaming: Evgeny Kuznetsov (Chelyabinsk, KHL) - The skilled Russian forward played in the KHL this past year and collected 9 points in 35 games. Many teams would shy away from both his often undisciplined play and his passport but the Capitals don't fear the KHL influence when they've got the lure of Alexander Ovechkin.
Posted by Dean Millard @ 6:00 AM

ideally kuznetsov should be gone by the time Caps roll by, but the Russian factor! going to hurt his chances

I saw one message board was complaining that both Dean and I predicted the Caps would take a Russian. "Why does everyone think 'we' only want Russians???" they said.

I'd argue that both Kabanov and Kuznetsov should be gone by this point but might not be simply because they are Russians. That said, WSH benefits because they have Ovechkin and guys would love to play with him.

It's not like these are reaches, this is a case where the Caps have guys fall to them for a reason they are pretty much immune to. (KHL)

Does anyone else find it ironic that the capital of the United States of America is a hotbed of Russian Hockey Stars?

I don't know who to feel sorry for - Eisenhauer for having his captial full of "Reds" or Stalin for having such talented sons selling themselves in the west...

The only thing that would make it funnier would be some kind of national security snafu...