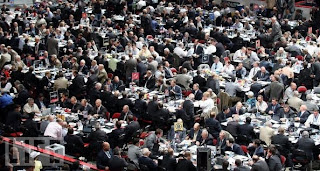 Every year on The Pipeline Show we lead up to the NHL Draft with a 2-hour special that we call The Draft Countdown. In years past we've been joined by the head scout of ISS, Mike Oke, who takes a truckload of email or phone questions on that year's draft class. It's always our most downloaded show of the season and easily the one we get the most emails for.

But... this year Mike Oke has moved on to become the Director of Player Personnel for the Peterborough Petes so ISS will not be a part of the annual special this time around. Dean and I discussed how we will tackle the big show this year, what we could do to make it better. We thought it would be great if we could track down someone who has actually been on the draft floor, with a NHL team, has scouted the players from the perspective of a NHL team, has knowledge and experience in preparing a NHL scouting staff for the draft, has been involved on the draft day trades and has been on the podium announcing the pick for a NHL team.

Oh, and he'd have to be available tonight for 2 hours.

Sounds impossible but we've done it and tonight we'll be joined, live in studio, to take your email questions on the Class of 2010 by someone who has lived the draft for the last 25 years... 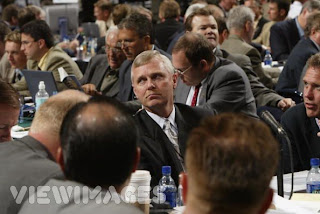 Kevin Prendergast was once the Director of NHL Central Scouting and that was before his two-decade career with the Edmonton Oilers. From 2000-2007 he oversaw the scouting staff and ran the draft for the team. Now for one evening he's going to be the Head Scout for The Pipeline Show.

It's Four days before the draft, what kind of things are being discussed by NHL teams right now behind closed doors? We see GMs chatting on the draft floor and immediately assume a deal is in the works - what is really being talked about in those mini meetings? How often are deals almost completed before falling through?

We'll hear Prendergast's thoughts on all of those topics as well as get his scouting reports all the Class of 2010 who he has actively scouted this year.

Also joining us for a segment tonight will be Chris McCarthy, former scout with the Oilers who worked for the team until a couple of weeks ago. McCarthy will educate us on all the high school players that are available this year like Nick Bjugstad, Charlie Coyle, Mark Alt, Brock Nelson and Kevin Hayes.

Of course we want your email questions so if you have some for specific players available this year, by all means fire them off to us at pipeup@theteam1260.com and we'll get comment from our special guests. Just try and keep them on subject and brief because we'll be trying to get to as many of them as we can and we always seem to run out of time.

The show airs live between 7-9PM here in Edmonton (9-11pm EST) on the TEAM 1260. You can follow along online by hitting our main site www.thepipelineshow.com or the station's home at www.theteam1260.com so make sure you don't miss a minute and get your questions in now!
Posted by Guy Flaming @ 8:35 AM