Is Daum OK for OK City? 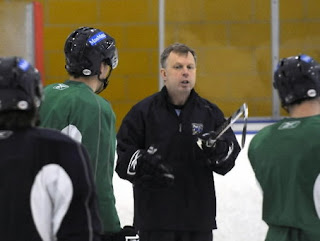 Last year the Oilers scouting staff went to the draft without contracts for the next season which was considered poor etiquette by people in the NHL that I spoke with about it. But July 1st is the start of all new contracts in the NHL and once again there are a couple important parts of the Oilers organization that aren't sure yet if they're part of the big picture moving forward. This year it's the minor league coaching staff.

Does anyone else find it odd that Rob Daum's future with the Oilers AHL farm team has yet to be decided? His contract is up in a little over 3 weeks yet no one has made it clear to him whether or not he'll be headed to Oklahoma City with the AHL affiliate next fall.

In a brief conversation I had with the coach over the weekend he indicated that he has met with Oilers GM Tambellini recently but that "nothing came of it". For the record, I asked Daum if he wants to be on the Barons bench when the Barons begin their AHL season. 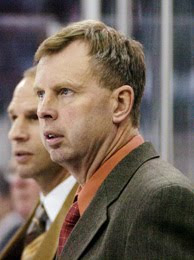 Yes the Springfield Falcons finished the year dead last and yes the Assistant GM in charge of running the team was fired from the organization because of it. You could argue that the coach might be in the same boat having been part of the last place AHL team for 2 years although in this case it would mean not renewing contract as opposed to a firing.

I think it's worth noting that, generally speaking, when a Falcon was recalled to the Oilers last season, he actually performed well (Colin McDonald, Ryan O'Marra and Alex Plante come to mind in their short stints). I think that speaks to the quality of coaching that Daum was doing.

"That's the thing that I was really happy about with our season," said Daum, "Those guys that came up here played well. All the reports that I got were that they were able to step in and help. That was a real positive thing from our standpoint in Springfield because that's our job - to prepare guys so that when they get that opportunity, the team doesn't pay a big price [putting them in the line up]. I think most people in the organization would agree with that."

To be fair, Tambellini obviously has a lot on his plate right now and perhaps getting to Daum's contract is on his 'To Do' list between the draft and the end of the month. That's possible.

Still... wouldn't you think if that is the case that there would have at least been some communication to Daum that would indicate that? If the coach doesn't know where he stands then that means either Tambellini hasn't decided or just hasn't informed him and at this late stage, both scenarios seem like poor management to me.

Hopefully it doesn't take much longer and Daum is rehired sooner as opposed to later. But who knows... if July 1st comes and Daum hasn't been re-signed, might he end up back in the WHL with the Edmonton Oil Kings? Bob Green hasn't called, not that the former Lethbridge and Prince Albert head coach has been expecting one.

"It's a great league to coach in but I haven't really thought about that," Daum admitted.

To me he's clearly got his eye on Oklahoma City first and foremost. That might change on July 1st though if he's looking for a job. It shouldn't come to that.

Rob Daum will be a guest on The Pipeline Show, Tuesday June 8th where we'll discuss the season that was and touch on some of the young up and coming players and coaches in the AHL.
Posted by Guy Flaming @ 5:00 PM

They haven't even got a GM for the Barons either. And another item on the to-do list for Tambo.

The difference is that they currently have a head coach who doesn't know if he's still employed beyond June 30th.

They keep saying the new assistant GM, in charge of OKC will pick the coach. It also sounded like that appointment was supposed to be done by now. Maybe the GM search is not going well?

Daum was on Oilers Lunch today. He did sound upbeat about his chances of coming back as coach in OKC.

One thing that maybe I'm not clear on is when you use the term "contract ending" it sounds very much like my field of work. I've been contracting as a software developer for the last 5 years and a couple times I've been uncertain about my next contract days before it was about to expire. But in these situations, I didn't consider the client to be poorly managed I just considered it business.

Coaching is an unstable profession and as much as I blame the team more than the coach, Daum's results don't put him in a position of strength either. I agree that there should probably be more communication but I think we have to be careful to separate business from personal agendas.