Olivier Roy to be Traded at Draft? 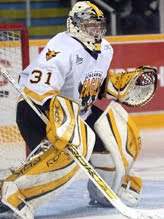 The Quebec Major Junior Hockey League trade window opens again on Friday, with all the teams gathered in Drummondville for Saturday’s midget draft. As always, rumours are flying about who will be traded where. Edmonton Oilers goaltending prospect Olivier Roy going to the Lewiston Maineiacs is one of those “worst-kept-secret” type of deals that always happen in the Q.

But whether Roy will go from Maineiac on paper to Maineiac on ice is another story, as another persistent rumour has Lewiston sending him to the Acadie-Bathurst Titan.

I’ve also heard Roy rumoured to the Moncton Wildcats, and that Bathurst will target Pittsburgh Penguins prospect Simon Despres of the Saint John Sea Dogs. But the Despres deal isn’t happening, so my money’s on Bathurst landing Roy for a package that includes the No. 5 overall pick, with some combination of young player(s) and/or another pick or picks. Bathurst always looks to make noise at the draft, and needs to have a contending team next year with attendance down the tubes and the team’s future in jeopardy.

The excellent QMJHL reporter in Halifax, Matt Wuest, has a solid rundown of deals likely to go down.

If it doesn’t happen Friday, there’s always the drama of draft day, when it’s not unheard of for six teams to huddle around and delay the draft for half an hour before announcing a blockbuster.

Other QMJHL names to watch around draft time:

MICHAEL MATHESON: The 15-year-old defenseman from Prince Edward Island is the top-rated player in the draft, but is apparently going to pursue the U.S. college route via the United States Hockey League after spending another season playing midget AAA in Quebec with the Lac St-Louis Lions. Neil Hodge of the Moncton Times & Transcript notes that there’s a “dishonest game” played at the Q draft every year when a highly-touted player plays the U.S. college card only to be drafted lower. The player then miraculously changes his mind and insists there was no pre-arranged deal. The league has implemented rules that could allow it to fine a team up to $100,000 and/or take away draft picks for two seasons. Whether it will happen this year, and whether the new rules have any teeth, will be an interesting story to keep an eye on.

LOUIS LEBLANC: The Montreal Canadiens prospect (who also played for Lac St-Louis) just finished his freshman year at Harvard, but there are rumblings he’ll end up in the QMJHL. The Chicoutimi Sagueneens hold his rights, but he could end up with the Montreal Junior. In a story in the Montreal Gazette, Leblanc says he’s sticking with Harvard for now, but sounds rather mysterious. Asked about a potential move to the Q, he said: “I’ll discuss (any change), firstly with myself, I’ll think about it. And I’ll talk with people who don’t have an agenda to follow, (people who) don’t own a team. I’ll make a decision with people who like me and want the best for me.”

How do you discuss something with yourself? Perhaps there was a bad translation here, but sounds like something is up with Leblanc.

DAVID SAVARD: Shortly after being named Canadian Hockey League defenseman of the year, the Moncton Wildcat has signed with the Columbus Blue Jackets.

Savard, likely to play pro as a 20-year-old next season, is one of the good stories of junior hockey. He has really developed as a player and a person each year, from a big, quiet French kid to a vocal leader who speaks two languages and plays a two-way game. Columbus may have a steal of a fourth-rounder. Moncton coach Danny Flynn has compared him to Uwe Krupp, a big, solid defensive defenseman who can move the puck. Savard, meanwhile, models himself after Duncan Keith of the Chicago Blackhawks, and his offensive numbers took a big leap this season, to 13 goals and 77 points from nine and 44 last season.

I haven’t talked to anyone in the Columbus organization about this recently, but highly-touted 2010 draft prospect Brandon Gormley is Savard’s defensive partner in junior, and they’ll probably have a chance to take him fourth overall this summer (or perhaps would feel they could trade down depending how teams value Ontario Hockey Leaguers Erik Gudbranson of the Kingston Frontenacs and Cam Fowler of the Windsor Spitfires, the other top-rated rearguards.)

GERARD GALLANT: Speaking of Quebec Leaguers winning national awards, “Turk” was named CHL coach of the year for his efforts guiding the Saint John Sea Dogs to the QMJHL final in his first year behind the bench. Now SI.com reports Gallant is the front-runner for the Tampa Bay Lightning coaching job, where his friend and former Detroit Red Wings linemate Steve Yzerman is the new general manager.

DAVID PERRON: The former QMJHL star is part of the NHL.com Goals of the Year promotion with H2H Media. Check out the contest, which highlights the 16 most amazing goals of the NHL season in a playoff format. Perron has already topped Zach Parise to advance to the second round, and faces Alex Ovechkin next, so will be needing plenty of votes.

CLAUDE GIROUX: Another ex-Q star. What a clutch tip-in 5:59 into overtime Wednesday to get the Flyers back into the final.