"Hurricanes" is a great name for a sports team because it immediately draws to mind the image of an unstoppable force of power, something mortal man can't hope to control. Unfortunately, I don't think I've ever seen a logo for a team with that name (or Tornadoes, Cyclones, Twisters, etc) that was decent. The Lethbridge Hurricanes tried adapting the Tasmanian Devil to theirs a few years ago and that was weak too. However, not as lame as the logo the NHL team uses regularly or this alternate. I know it's a meteorological symbol or something... but that's plain and boring and has nothing to do with hockey. The name fits geographically, I get that, but you're marketing team is screwed trying to tie it into the sport. Might as well call them the Carolina Big Mouth Bass... it makes as much sense and then you could have a fish chomping through a stick. Like San Jose.


1st Pick Last Year: Philippe Paradis (27th overall) – He had 50 points in his draft year with Shawinigan and it would be natural to expect an increase in production with another year of experience under his belt, but, Paradis’ point toal actually dropped a bit this past season. The 6’1, 200 lb center had 44 points this year albeit in 3 fewer games. He was dealt to Toronto and at the end of the QMJHL season Paradis joined the Toronto Marlies for 4 games and recorded 2 points. 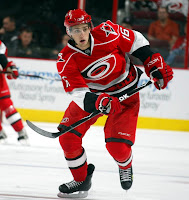 The Good: Brandon Sutter (11th overall, 2007) – Sutter has played professionally now for two years spending most of that time in the NHL. He’s played 122 games with the ‘Canes and has compiled 46 points including 21 goals just this past year. He was drafted because of his 2-way reliability but considering his WHL best was 26 goals, it’s probably fair to suggest that Carolina was pleasantly surprised with his ability to find the back of the net. He’s held a minus-1 rating through his early NHL career.

The Bad: Nate Hagemo (58th overall, 2005) – Drafted in the second round out of the Golden Gophers program, Hagemo has fizzled out as a pro. Heck, injuries cut short his college career and then real life, off-ice issues took their toll as well. Substance abuse problems led to legal trouble including an arrest for possession of drugs. His last season playing hockey was 2008-09 when he played 14 games, 10 with the Amarillo Gorillas of the CHL.

The Unknown: Jamie McBain (63rd overall, 2006) – After three years at Wisconsin, McBain left the school and turned pro. He made his AHL debut this past season and earned 40 points in 68 games. That was good enough for a 14-game stint in the NHL and he had 10 points there. Probably safe to suggest that he’s got a good chance of sticking with the big club next Fall but he’s not an established NHL player yet. There’s no reason to think he won’t make it though. 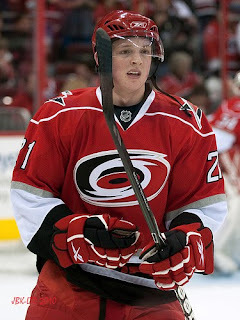 Coming Down the Pipe: McBain is probably the guy closest to making the jump but hot on his heels are a smattering of forwards. Zach Boychuk and Drayson Bowman (pictured) lead the charge; Boychuk fit into 31 NHL games this past year and Bowman dressed for 9. Both players have had success in the AHL. Ohio State forward Zac Dalpe turned pro and was a near point-per-game player in Albany at the end of the regular season and for the 8 games in the playoffs. Brett Carson was taken way back in 2004 but played 54 of his 59 NHL games just this past year. Goaltending is far from set – Justin Pogge is onto his third organization now, Mike Murphy only played 20 games in the AHL this year and Justin Peters might be the best of the lot but even he isn’t projected to be a starting NHL goalie.

Draft Trends: Carolina doesn’t look much to the QMJHL but did last year with Paradis. The OHL and WHL are picked through far more often by Canes scouts. The last time they took a defender with their first pick was in 2006 with Jamie McBain. Mike Murphy is the only goalie the team has drafted since 2004 when they chose Peters and Magnus Akerlund.

Dean Millard: Nino Niederreiter (Portland) - No player from this year's draft class came out of the World Junior Championship with more hype than the Portland Winterhawk from Switzerland. He led Portland with 36 goals and showed at the WJC that he has a nice mean streak to go with his solid frame. Carolina is solid down the middle and now will have a point producing winger to add to their stable. 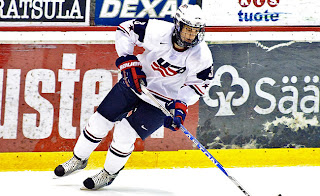 Guy Flaming: Derek Forbort (US-NTDP) – The big 6’5, 198 lb defenceman from the U18 development program is headed to North Dakota where he’ll mature physically and play against top calibre competition in every game. There aren’t many d-men in the 2010 draft class projected to be top pairing guys but he’s one of them. He skates and has the offensive instincts of someone more like 6’ than of his size which usually makes a guy a defensive specialist.
Posted by Guy Flaming @ 6:00 AM

That logo looks like lips and not just the obvious one ;)