When all the teams trotted out their new alternate jerseys a few years ago, the St. Louis Blues were one of the clubs that were applauded for their new look. The logo here was a great creation that didn't erase the music note but instead added a famous city landmark. For me it's one of the rare logo changes that might actually be an improvement on the original. I don't know that it is, but it's an argument I'd at least be willing to hear.


1st pick last year: David Rundblad (Skelleftea, SEL) Rundblad has many intriguing qualities to him. He has decent size at 6'2, and will add to his almost 190 pound frame, but the biggest reason St. Louis grabbed him was his offence from the back end. He’s a great skater who loves to rush the puck. While he does need to work on his defensive game, Rundblad will be a point guy should he develop properly. He had 5 points in 6 games with Sweden at the WJC this year. 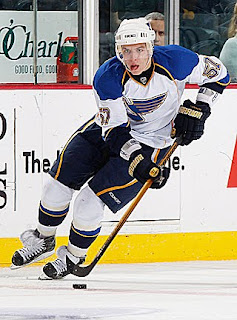 The Good: David Perron (26th overall, 2007) Perron jumped straight from the draft to the NHL after the Blues scooped him up late in the first round. He lit up the Q for 39 goals in his draft year, which was his one and only CHL season, and his goal totals have improved in each of his 3 seasons with St. Louis. Perron has put on 20 pounds since his draft year and also has the hockey sense to play a complete game and checking role if asked. He was the team’s 3rd first round pick going behind Ian Cole and Lars Ellar, and has to be the steal of the 2007 draft, as only Patrick Kane who went first overall has played more games and scored more goals then Perron.

The Bad: Aaron Palushaj (44th overall, 2007) The Blues 5th pick inside the top 44 in 2007, Palushaj fizzled fast. After a 22-goal, 67-point season in the USHL, he scored just 23 times in 2 seasons with the Michigan Wolverines. After leaving college he spent half the year with the Blues AHL club in Peoria scoring 5 times in 44 games before being traded to Montreal.

The Unknown: Ian Cole (18th overall, 2007) Cole manned the blueline for 3 years at Notre Dame where he was steady but unspectacular. His freshman season saw him lead Notre Dame in scoring from the blueline with 8 goals, 4 of them on the power play where he uses his good shot. Cole is strong at 6.01 and 215 and takes care of his own first, while still able to chip in a little offensively. He played 9 games in Peoria last year and get better with a full season in the AHL next year. 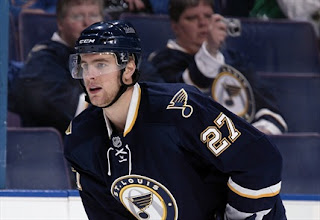 Coming Down the Pipe: Alex Pietrangelo is hoping the 3rd time is the charm, and it should be as the 4th overall pick from 2008 has been close to making the Blues the past 2 years. However his 2 extra years in junior should help him in the long run. St. Louis has drafted in the first round 8 times in the last 5 years, and have had 15 selections in the first 2 rounds over that time. They are set in net with Jake Allen and Ben Bishop on the way. Lars Eller, the 13th overall pick in 2007 had a solid season in the AHL this year.

Draft Trends: The Blues love building from the back end, as they’ve used 5 first round picks in the last 5 years on big, mobile defenceman. They’ve also gone to Sweden for first round picks 3 times over that span.

Dean Millard: Alexander Burmistrov (Barrie) - He was Russia’s most consistent player at the World Junior Championship and had a fantastic first season in the OHL with Barrie. There is a rumour that he has a contract to head back to the KHL next year, but former Colts head coach Marty Williamson told TPS this year that’s not true. St. Louis adds another skilled forward to their growing young bunch. (Photo below: Aaron Bell/CHL Images) 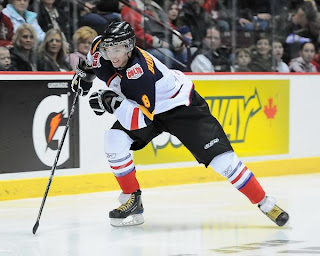 Guy Flaming: Austin Watson (Peterborough) - The 6'3 winger spent most of his 42 games this past year wearing a Windsor Spitfires uniform but it was as a Pete that he had his most productive month. In March he scored 17 points and followed that up with an appearance in Belarus at the World U18s with the gold medal winning American squad. Watson might have been a bit overshadowed in Windsor but once he was dealt to Peterborough scouts found that he held the spotlight all on his own. Still raw but with a ton of upside and potential.
Posted by Dean Millard @ 6:00 AM