Of the Original Six teams, I think Boston has had the most variety in their logo. I could be wrong but it seems that way to me. The classic B is as much an iconic symbol of hockey as Detroit's winged-wheel or Montreal's 'C'. That didn't stop the team from bringing out the "Winnie the Pooh" crest a few years back and then bringing on this one, an updated tribute to a really, really old Bruins crest. It's sharp but I wouldn't want it to replace the 'B' by any stretch of the imagination.

1st pick last year: Jordan Caron (25th overall) – Caron’s year started late after suffering a separated shoulder thanks to an open ice hit from Colten Teubert in a Team Canada exhibition game. The power forward was dealt to Rouyn-Noranda at the QMJHL deadline and bagged 33 points in 23 games adding 18 more in 11 playoff games. He won a 2010 WJC silver medal with Canada chipping in with 4 assists in the tournament. 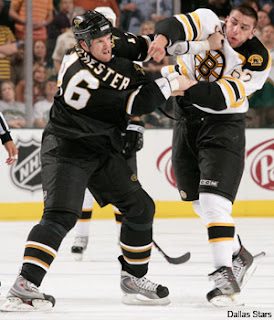 The Good: Milan Lucic (50th overall, 2006) – A fan favourite in Beantown, Lucic was little more than a tough guy with the Vancouver Giants until after he’d been drafted by Boston. The season after scoring 19 points he catapulted to 30 goals and 68 points and helped lead Vancouver to the 2007 Memorial Cup title. Now an established pugilist and power forward at the NHL level, Lucic is the type of player that all 30 teams in the league wished they had on their roster.

The Bad: Zach Hamill (8th overall, 2007) – I was a big proponent of the Everett Silvertips forward in his draft year so I’ll admit that it pains me to label Hamill as a ‘bad’ pick. I’m not willing to write him off just yet, I knew his skating could hold him back, but his AHL numbers have been disappointing for a guy taken top 10 in the draft.

The Unknown: Yuri Alexandrov (37th overall, 2006) – The newly signed Russian prospect will make his North American debut next year and after 5 professional seasons in his homeland, fans hope he steps in with the Bruins of the NHL and not the minor league version. Alexandrov recorded 21 points in 56 KHL games with Cherepovets this past year. 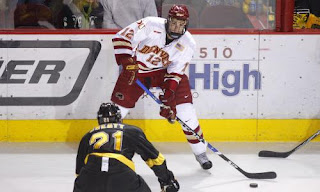 Coming Down the Pipe: The Bruins have been one of the better drafting teams over the last several years and have collected an impressive list of prospects. 2008 1st rounder, and former Camrose Kodiak and Denver Pioneer, Joe Colborne has signed his entry level deal. Caron and Maxime Sauvé join 2-year pro Brad Marchant from the QMJHL. Hamill and Mikko Lehtonen have been good on the farm and might start pushing for NHL duty. There are holes though – especially in net where the prospect depth runs shallow now that Tuukka Rask is now considered a full time NHL player. (photo: DU Athletics)

Draft Trends: Boston hasn’t selected a European in the last two drafts but did every year prior to that so it may have just been a blip as opposed to a change in strategy. CHL or NCAA doesn’t really matter to the Bruins, they’ve taken guys from either league and have had success with them. Michael Hutchinson is the only goalie Boston has taken since the late rounds of 2003.

Dean Millard: Mark Pysyk (Edmonton) - Pysyk went 3rd overall in his bantam draft and has been the Oil Kings best defenceman since he put on a jersey. He’s a terrific skater and passer and is great positionally but he does need to work on his shot and get more aggressive. After taking an impact forward early in the draft the Bruins shore up their back end with a solid 2-way D-man. 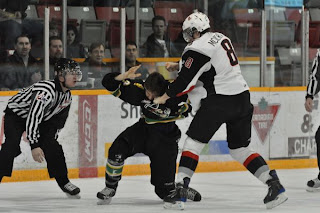 Guy Flaming: Dylan McIlrath (Moose Jaw) – The toughest blueliner in the 2010 draft showed at the end of the year that he had more to offer than his skills at realigning noses and jaws. 16 of his 24 points came after the WHL trade deadline that saw Travis Hamonic leave the team. McIlrath is a huge 6’4, 212 lb wrecking machine that is already considered one of the most feared players in the WHL... as a 17-year-old. (Photo: Matthew Gourlie, Moose Jaw Times-Herald)