What's old is new again. The Penguins brought back the powder blue uniforms for the Winter Classic in 2008 and they were an instant hit with the fan base. In response to the buying public's demand for the retro look, the team began using the old familiar logo from the original days too, with one exception. There's no scarf on the Penguin that skates on Sidney Crosby's chest. 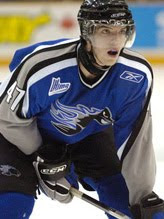 1st pick last year: Simon Despres (30th overall) - The Penguins scooped up Despres with the final pick in the first round last year. He was the first overall pick in the QMJHL draft in 2007. This past season every single stat improved on his resumé; goals, assists, points,+/-, PIM, PPG, GWG - You name it, he upped it. Despres didn’t make Canada’s World Junior team but has twice worn Canadian colours, both at the U18 level. He led the Sea Dogs to the Q final with 19 points in 21 playoff games. Despres was nicknamed ‘Horse’ early in his Q career because of his ability to munch minutes. Despres impressed everyone at Penguins camp last year, and even though he could play again in Saint John next year will get a long look from Pittsburgh.

The Good: Kris Letang (62nd overall, 2005) Excluding Sidney Crosby, Kris Letang is one of the best Penguins selections in the past 5 years because he’s a big time value pick. Taken in the 3rd round, in the same draft that netted them the game’s greatest current player, he’s starting to become a cornerstone of the Penguins blueline. It will be very interesting to see how Letang continues to develop if Pittsburgh doesn’t resign Sergei Gonchar and Letang’s responsibility increases.

The Bad: Michael Gergen (61st Overall, 2005) After Getting Sidney Crosby it didn’t matter who the Penguins got (See Toews draft for Chicago here) but Letang was a bonus. So it can’t be too concerning that a 2nd round pick from that year didn’t pan out. Michael Gergen started his life as a Penguin prospect well scoring 14 goals and 22 points as a freshman at Minnesota, that after he had played at Shattuck St. Mary’s. But his totals never approached his rookie numbers scoring just 20 goals his final 3 years combined. The 5'11, 185 lb winger does have some speed and skill, but spent this season in Salzburg, Austria.

The Unknown: Carl Sneep (32nd overall, 2006) Sneep was the Pens 2nd pick after Jordan Staal 4 years ago, and he is now ready to turn pro. Sneep has good size at 6'4 and 205 lbs and the former Mr. Hockey finalist from Minnesota had a break out senior year at Boston College. 11 goals and 17 Assists led defenceman in scoring for the NCAA Frozen Four Champion Boston College Eagles. It was his second Frozen Four title. Sneep is an above average skater who generates offence with a good shot. He could stand to get a little more edginess in his game. 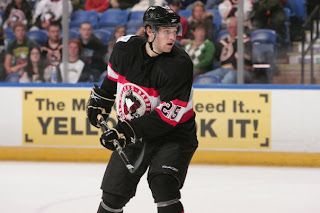 Coming Down the Pipe: Pittsburgh has built it’s current team, the one that went to back-to-back Stanley Cups winning the 2nd attempt, on rock solid drafting. They bit the bullet and struggled and won a couple of lotteries on the way to land Malkin and Crosby. They have a few irons in the fire still with pleasant surprise Nick Petersen. The 4th round pick in 2009 sniped 39 times and racked up 79 points in under 60 games with fellow prospect Despres in Saint John. As for next year, Eric Tangradi will take a run at a roster spot. The 38 goal man with Belleville of the OHL in 2009, put up 17 goals and 39 points in the AHL this year. Also on the way could be Dustin Jeffrey, who Pittsburgh snagged in the 6th round of 2007 and his 71 points was near the top in the AHL this year. Robert Bortuzzo is a 6'4, 210 lb defenceman who racked up 109 PIM this year with Wilkes-Barre and is starting to fill out his frame. Beyond the farm, Philip Samuelsson thinks the game terrifically, but needs to improve his first step. Samuelsson faced the opposition's top line all year long with Boston College. He was involved in an off ice accident where alcohol was involved, but there is no word whether this will affect his future at BC. Nic D'Agostino manned the blueline at Cornell this year and played a ton of minutes in his freshman year, making the ECAC all rookie team. Pittsburgh didn't sign 2008 4th round pick Nathan Moon who had 69 points in 65 games with Kingston this year. They did ink fellow '08 draft pick Patrick Killeen who had an encouraging season manning the pipes in Brampton this season, and because there isn't a transfer agreement with Russia, they didn't have to sign Alexandre Pechurskiy who played in Tri City this season and was an emergency call up for the Penguins this year.

Draft Trends: Pittsburgh does not ‘go west young man’ very often. They haven’t drafted from left of Minnesota since the 3rd round of 2007 when they took Casey Pierro Zabotel then of Merritt in the BCHL. While he went onto play in the WHL, the Penguins haven’t taken a WHL kid since Moises Gutierrez of Kamloops in 2004. They dipped back into the BCHL and AJHL in 05 and 04, but their last Western born impact player was Colby Armstrong out of Red Deer, who they parlayed into Marion Hossa for a cup run. 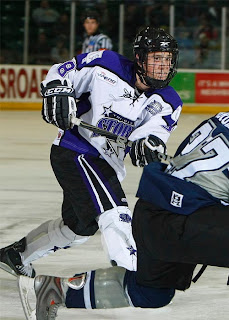 Dean Millard: Jaden Schwartz (Tri City) - Schwartz tore up the USHL with 83 points in just 60 games, very good numbers in a league that’s generally a defence first mentality. Shifty and smart on the ice his WHL rights are owned by the Tri City Americans. Not that Pittsburgh is lacking skill, but Schwartz is a guy who seems to fit their style, and as mentioned it’s been a wile since they plucked from the west. Schwartz came through the Notre Dame Hounds program.

Guy Flaming: Nick Bjugstad (Blaine) - The monstrous forward is coming out of the high school ranks and is headed toward Minnesota's hockey program. At Blaine, Bjugstad recorded 29 goals and 60 points though 25 games in high school. There's still a lot of work to do for Bjugstad but adding his raw potential to the organization is a move that will payoff down the road.
Posted by Dean Millard @ 6:00 AM