It's the day that Oiler fans have been waiting for since April when the NHL Draft Lottery officially gave the franchise its first ever 1st overall daft pick. While the answer to Taylor vs Tyler will finally be decided tonight, some fans want to know who else the team might be coveting. As in years past, I've done by own due diligence and here are a smattering of names that I think will be of significance to the Edmonton Oilers.


If the team can somehow add a pick in the 10-15th overall range, I believe there are two players that Edmonton will zero in on. It's become common knowledge that defenceman Dylan McIlrath is considered the toughest player in the Class of 2010. It's been described to me that the Moose Jaw blueliner is on a level by himself when it comes to the pugilistic side of the game and that his offensive skills are underrated. A team will probably need to get into the top 15 to have a legitimate shot at him.

Thursday's presentation of Oil Change on TSN has fans talking, especially a snippet of the program that showed Edmonton scouts talking about a dark horse player they'd consider trying to trade up to get. There are several cut scenes with scouts making comments like:

- "I felt that if this guy could have got another month he might move up into the #2 spot, he scored a lot of key goals" (Bob Brown)

- "This boy told us in his interview that he'll play in the NHL at 19. That's how confident he is in his development coming forward" (Stu MacGregor)

- "I think this boy's the steal, of everybody there. I think that he is loaded with character, he can play numerous roles up front." (Brad Davis)

- "This guy was one of the highest profiled ever in terms of character, drive and leadership." (Stu MacGregor)

- "We may trade into that area to get somebody like this." (Stu MacGregor)

Now I'm not certain that these were all comments in regards to one single player and not on two or three and simply spliced together for the documentary. But recognizing some key terminology in there and comparing it to comments made by Kevin Prendergast on our show this past Tuesday, I think Austin Watson fits the "dark horse" profile. 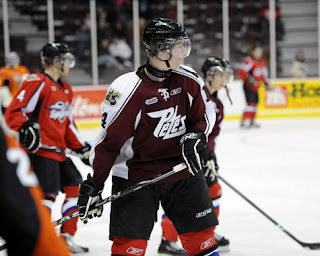 Watson missed a month of activity after being injured at the Top Prospects Game. When he came back he went on a torrid streak piling up 19 points in the final 7 games of the year; 17 points in just the 5 games in March!

On Tuesday Prendergast said this about Watson:

"There's a lot of upside in Austin Watson... a big strong kid, good skater, works hard at both ends of the ice. I don't think he's going to be a first line player in the NHL but he'll be a second line player and he'll contribute in all areas. He does whatever it takes to win hockey games. My understanding is that at player interviews he was one of the best players they've (Edmonton?) ever interviewed. He has huge leadership qualities, he's in a good organization in Peterborough and I know that he was the last person that Windsor wanted to give up in that deal to get Kassian. The upside... it's incredible what he could achieve and I think down the road... he reminds me a lot of Ryan Kesler in Vancouver and if you've got a couple of them on your team then you've got a pretty good hockey club."

So in the 10-15th overall range: Dylan McIlrath or Austin Watson.

Should the team pick up a pick between 20-30 then defenceman Jarred Tinordi would be in the mix. A big, rugged blueliner who might have some similarities to McIlrath in terms of physical play but not to the same degree. I get the sense that he's a more attractive option than fellow US-NTDP blueliners Jon Merrill, Stephen Johns and Justin Faulk. I don't expect Tinordi to be available after the 25th pick currently held by the Vancouver Canucks if he's even around that long.

The forward to consider in that area is Tyler Pitlick who played at Minnesota State Mankato last year but has jumped ship to the Medicine Hat Tigers of the WHL. He's a talented power forward who produced 19 points with limited ice time with the Mavericks but will be a first line player for the Tigers. "He's made for the WHL" I was told.

When you get to Edmonton's 31st overall pick, the first in round 2, it's much harder to predict because there are a number of different scenarios that see some players available and others not. It's easy to suggest Quinton Howden or Beau Bennett would be the guy if he's still free, but the chances of that don't appear to be very realistic. 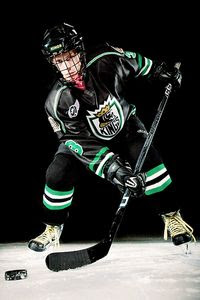 Here are a few names of guys expected to still be unclaimed at that point who the club would debate over. Charlie Coyle, who former Oiler scout Chris McCarthy raved about during our special this past Tuesday. There is a lot to like about the EJHL Rookie of the Year including his 6'2, 202 lb frame and his desire to play at a program like Boston University.

Saskatoon's Curtis Hamilton will likely go somewhere around this point despite missing a ton of action this season due to injury. He broke his collar bone twice and that's of some concern moving forward but he's someone I know the team has an eye on. Prendergast believes that if healthy, Hamilton would have ended the year in the same ball park as Portland forwards Nino Niederreiter and Ryan Johansen.

Less likely for the first pick in round 2 but quite viable if still available at the #48 pick is Portland's pest Brad Ross. I get the impression that I like him more than most of the Edmonton staff, but not all. while some teams have told us that they view him more as a 3rd round target, I'd be stunned if he lasted that long. He finished one point behind Ryan Johansen in scoring but potted two more goals even though they played the same amount of games. However, Ross spent over 200 minutes in the penalty box so his "points per minute of ice time" (is there a such a stat?) would crush his Portland linemate's.

Those are some names to chew on, we'll have a clearer picture about rounds 2-7 later tonight after the first 30 players are taken.

Remember that you can follow the TEAM 1260's draft coverage all day today from 6AM right through until midnight. Dean and I will jump on board starting at 5PM and take you through the first round and beyond until Wil Fraser and Corey Graham boot us out of the studio at 9PM. Also don't forget to join us again on Saturday As Dean, Corey and I cover the second day of the draft with contributions from the TEAM 1260 horde on hand in L.A.
Posted by Guy Flaming @ 10:30 AM

Thank, Guy. That one line from Prendergast gives a pretty good indication that the testing comment was about Watson.

Now I'm not certain that these were all comments in regards to one single player and not on two or three and simply spliced together for the documentary.

I kind of wondered this as well. The comments could possibly be completely unrelated.