This week, I am taking a look at the top 5 Oilers drafts picks of the new
Millennium, which is basically since the current management group, minus Steve Tambellini, took over.

5. Theo Peckham-3rd round, 75th overall, 2006
Yes I know he's only played one game, but this one is being based on potential, and will be the only player to make the list because of it. The Oilers didn't have a 1st round pick in 2006 after dealing it to Minnesota as part of the Dwayne Roloson package. After selecting Jeff Petry (who could be on a similar list in a few years) they grabbed Peckham in the 3rd round, 75th overall. Up until that point, the Richmond Hill product had amassed 445 penalty minutes in 128 games with the Owen Sound Attack of the OHL. After getting drafted, Peckham scored 10 goals - including a hattrick - which was 3 more than his 2 previous years combined. He totalled 35 points a career high by 10. But the Oilers didn't draft him for his soft hands. In 59 games last year with Springfield, the stay at home blueliner racked up 174 penalty minutes. So far he hasn't looked out of place at Oilers camp or during the pre-season. He's jumped into fights to protect teammates, dished out a few checks, and worked really well with partner Taylor Chorney. The two could become a pairing for years to come. I asked one member of Oilers management recently if the team wanted to see Chorney and Peckham play together all year in the AHL. To paraphrase the response I received: yes, but he's making a real push to make the team now. 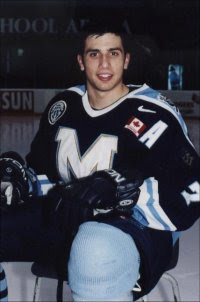 4. Andrew Cogliano-1st round, 25th overall, 2005
He already owns an NHL record for scoring 3 straight overtime goals, and his sticks and gloves from the games are in the Hockey Hall Of Fame. Cogliano was among a pretty good crop of prospects the Oilers harvested from 2005. Taylor Chorney and Slava Trukhno should star in Springfield this season and Chris Vande Velde shouldn't be far behind after he wraps up his 3rd year with the UND Fighting Sioux this season. But the 25th overall pick was the key "Cog" from the 2005 draft for the Oilers. Cogliano was a sniper in Junior A, scoring 62 goals in 86 games, and netting 102 points in his final season with the St. Mike's Buzzers (see left) before heading to Michigan. The Oilers drafted him before he went to college, and while he didn't light the world on fire with the Wolverines, scoring 36 goals in 77 career games, he did play for Canada twice, winning gold at the 2006 and 2007 World Junior Championships. Cogliano had 8 points in 12 career games with Canada.

Last year I made the prediction from rookie camp in Yellowknife that Cogliano was a candidate to fill Fernando Pisani's spot, after the dependable forward was sidelined with Ulcerative Colitis. He did more than that, scoring 45 points and was one of only 6 Oilers to be on the good side of the plus/minus stat with a plus 1 rating. Just 3 years after being drafted, Cogliano played in all 82 games for the Oilers and could be a sniper for years to come.

3. Kyle Brodziak-7th round, 214th overall, 2003
The 2003 draft is considered to be one of the best of all time. Names like Fleury, Staal, and Phaneuf come to mind. for the Oilers it was Pouliot, McDonald and Jacques with their first 3 picks. 5 selections later by the team, and the late Lorne Davis convinced Kevin Lowe and company to take a chance on a St. Paul product named Kyle Brodziak. The Moose Jaw forward had played almost 3 full seasons with the Warriors and was coming off a 32 goal season. Surely it was worth spending a
7th round pick on him. It turned out to be a wise decision.

The next season, which would be Brodziak's last with the Tribe, he upped his goal total to 39, and added 54 assists for 93 points. He also tallied 9 points in 10 playoff games. However, the questions about Brodziak surrounded his skating ability, or apparent lack there of. Guy and myself were in the press box at Rexall Place one evening, when Brodziak, then of the Edmonton Roadrunners had a breakaway from centre ice. He must have had atleast 3-4 strides on the D-man chasing him. We were stunned when Brodziak was caught. It was like he was skating in cement. I think there were a few other media members there as well, and one of them might have bet Robin Brownlee that Brodziak would never play in the NHL, but I might be mistaken on that one. Since that night Brodziak has improved his skating immensely (take note Rob Schremp haters) and notched 56 points in 68 games with Springfield in 2006-2007. Obviously if you watched the Oilers stretch run last year you saw how impactful Brodziak was on the Oilers fourth line. He notched 10 points in the team's final 12 games. It should be noted that he also went on 8 and 9 game pointless streaks throughout the year. But Brodziak is more valuable to the Oilers as a checker, penalty killer and right handed face off man. He could end up in the middle between Fernando Pisani (himself a late pick, 8th round in 1996) and Dustin Penner this season.


2. Sam Gagner-1st round, 6th overall 2007
There's really not a lot I need to say about Sam Gagner. He took the Oilers by storm in training camp after using the Russians as target and dangling practice during the Super Series last fall. Gagner was the first 18 year old to make the club and have a significant impact since Jason Arnott notched 68 points in 1993-1994.

Gagner didn't reach those numbers, but did put up 49 points in 79 games and made some wonder how long it will be until he moves off the kid line and onto the Oilers top line. I think you'll see him on the first power play unit at times this year. He's not the greatest skater, but he's so shifty he's hard to catch. He's also not the biggest guy, but has such a strong lower body, he's hard to knock off the puck. Like last year when Gagner used the Super Series to arrive at camp game ready, he toured parts of Europe with a London Knights alumni team for charity this August, and the biggest benefactor could be the Oilers. 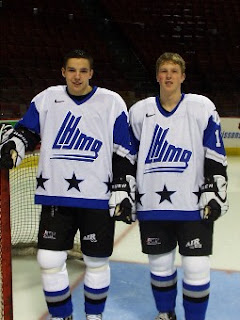 1. Ales Hemsky-1st round, 13th overall, 2001
While it's hard to argue with the first 2 names on the 2001 NHL entry draft list (Kovalchuk and Spezza) you have to wonder if 10 NHL G.M's are wondering how Ales Hemsky slipped past them and fell to the Oilers at 13. I'll admit that hindsight is 20/20, but come on, Hemsky did have 100 points with Hull (now Gatineau) of the QMJHL in his North American season. He followed it up with 97 points then joined the Oilers. Hemsky (seen here with Radim Vrbata) has never played a game in the minors and watched his pre-lock out point total of 34 points, sky rocket to 77 in 2005-2006. He's neared the magical point per game pace the last 2 seasons with the Oilers were ravaged by injuries. A healthy Shawn Horcoff and Erik Cole on left wing, 90 points shouldn't be a stretch this year. The question I'm asking out loud is can Hemsky reach the century mark? After all, according to The Pipeline Show, he is the top draft pick of the new Millennium for the Oilers.

Disagree with our list? Please, by all means chime in.
Posted by Dean Millard @ 12:25 AM

Cogliano and Brodziak may eventually pass Stoll too, but he's had a pretty good career.

The Gagner pick is a tough one to pinpoint. On one hand, Gagner could be the best player in the draft and at 6 was a steal. On the other, there were good picks like Voracek and Alzner so it was a win-win. My list is

Peckham hasnt done enough to warrant being on the list yet.

Cogliano was a rare 2005 success when there were a lot of misses.

interesting lists boys...I did consider Stoll and even Matt Greene, but I'm more about who is still here, and could be here, hence the Peckham being the only potential type guy on the list.