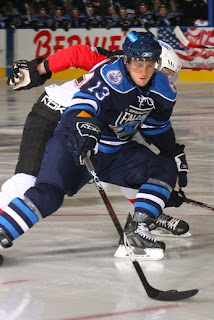 As you know, last week Dean and I announced that The Pipeline Show is going to be holding our first ever silent auction, live on the air this coming Tuesday night (September 16th).

You can hear the official announcement by clicking (here) where you will have two options; the Kevin Karius or the Bad Ass Trivia segment, we talk about the event at the start of both of them.

Here's the gist; last year we talked to Springfield about the possibility of getting a jersey donated to us so that we could auction it off for charity. The Falcons were excited to help us out and with help of their Media PR genius Damon Markiewicz, we were even able to get a number of the players to sign it as well.

All the proceeds that we take in from the auction will go to the Cross Cancer Institute here in Edmonton.

I think it's safe to say that we've all be affected by Cancer in some way either directly or through a friend or family member. Cancer sucks. This is our small contribution to the fight and we hope you'll help us out. 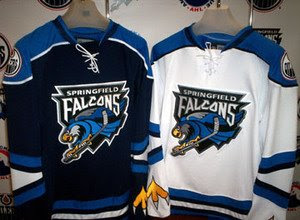 So what we're going to do between now and the 16th is promote the heck out of the auction as best we can. We're going to set the minimum bid at $100 which is basically the cost of the jersey. You'll hear me on the morning show with Jake Daniels and I'll remind everyone listening about it at the time. Later on that same day Dean is going to drop in on Just A Game with Jason Gregor and mention it to the afternoon crowd.

At 7:00 PM that night we'll open the phone lines so you can call in with your credit card at hand and make your bid. We'll update the leading bid as we go to and return from commercial breaks so you'll always be in the know of where things stand.

If you're a fan of the Edmonton Oilers and especially the prospects, this is a pretty cool item to have. It might not be something to wear around because with the autographs, there's obviously some value there that you don't want to ruin by spilling your beer on it. 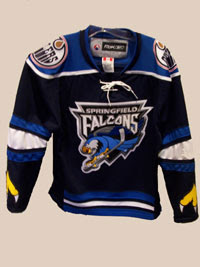 What you probably want to know is whose names are on the sweater right now. Here is the list that I can identify for sure:

It is an authentic RBK Edge jersey, as seen in the photos here although not as dark in real life as in that bottom picture, it is blue and dark blue, not black as it appears. If you have any questions, please leave a comment and Dean or I will give you an answer.

The Cross Cancer center in Edmonton did a lot for my cousin while she was sick with cancer, I think it's great that you're helping a place that really needs it.

My mom successfully fought off breast cancer twice now and my dad is currently going through chemo... like I said, we've all got similar stories. Doing something, even if we only raise a few hundred bucks... it helps if only to make the effort.

Couldn't agree more Ryan and Guy. My wife was diagnosed just over 2 years ago with breast cancer, and thanks to the Cross Cancer institute came through with flying colors. Unfortunately my Mother lost her battle with it years ago, but that's why we're doing this auction, as every little bit helps. Hope to hear from you Tuesday Ryan, and thanks for your support.

Just had quick question regarding these jerseys, are they crested with the players names or a blank jersey with players signature?

It is a un-numbered jersey that the several players signed.