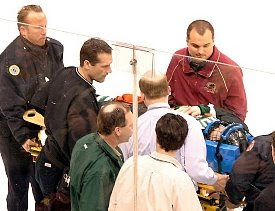 Hey just wanted to give you all a heads up about rookie camp. One of the great stories surrounds Robbie Bina and Geoff Paukovich. You can read Guy's story about it at The Hockey News. You will also be able to see a story on Global Sports this Monday at 6 and 11 PM, with footage of the injury, just an FYI. (photo courtesy John Daul SiouxSports.com)

Guy and I will post our thoughts about day one of rookie camp a bit later.

One other Oilers note, Geoff Sanderson has earned a training camp invite from the Chicago Blackhawks. The Nashville Predators were also said to be interested in the veteran. Good to see a nice guy have the chance to play another year. Without Robert Lang the Hawks have a spot up front, and with Sanderson's experience around all the kids in Edmonton last year it might be a good fit in a young windy city.
Posted by Dean Millard @ 4:07 PM

Where did Phil Gervais end up - I do not see him on the Oil Kings roster any more, also anything where swsytun is going to play this year

Not that this is on topic with Dean's post but...

No idea where Gervais went after he got cut from the Oil Kings... guessing either Jr A or perhaps he was released but I don't know.

I haven't heard where Tyler Swystun is this year.